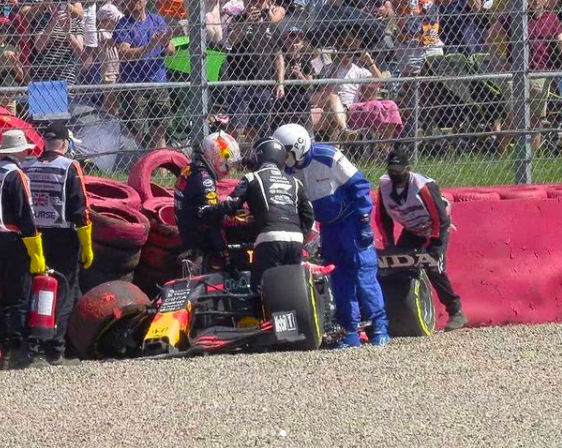 There was a war of words exchanged during intense scenes at Silverstone.

A wheel-to-wheel first-lap crash led to Max Verstappen being taken to the hospital for further checks.

Two championship rivals, Hamilton and Verstappen were driving alongside at 180mph into turn 9, Copse corner, and a 51-G impact crash sent Max into the barriers. The Dutchman was able to exit the damaged Red Bull 33 car but appeared lightheaded and winded. Silverstone Circuit Medical Centre trackside doctors first assessed Vertsappen’s state. He was then taken to Northampton General Hospital for further precautionary checks.

Not everyone was satisfied by the incidents and actions taken today. Based on recent social media updates, Max is ok.

The sportsmanlike conduct displayed today was something alright. Fuming and furious, Christian Horner, Red Bull team principal protested to F1.com, “He’s driven this circuit for years; you know you don’t do that here. The result – thank God we haven’t had a driver that’s been seriously injured or worse today.”

Horner was hugely relieved that his #1 driver was able to walk away to reach the ambulance but fully blamed Hamilton for the incident. While chatting to Channel 4, he claimed, “I think it was a desperate move. He failed to make the move in the first part of the lap, which he was obviously geared to do, and then it was just a desperate move sticking a wheel up the inside which you just don’t do. Copse is one of the fastest corners in the world. You don’t stick a wheel up the inside. That’s just dirty driving.”

At a post-race press conference, Horner honed in, “If you look at the overhead he’s run wide into the corner. He’s carried too much speed. That move was never on. Lewis is a world champion of seven titles. That was an amateur’s mistake and a desperate mistake. I don’t care what Lewis said. Have a look at your own analysis, draw your own comparisons. For me, that’s a hollow victory.”

By Morgan Holiday16 hours ago

During the race via team radio, Lewis said, “I was ahead going in there, man. Fully alongside, it was my line. He turned in on me, man. It was a big hit on the left front, so do a big check. Is Max ok? I’d given the guy space.” From there, stewards investigated the collision resulting in a 10-second penalty for Hamilton. Once informed, the Brit reset his mind and focused on finishing first.

Hamilton stated post-race, “I always try to be measured in how I approach, particularly with battling with Max, he’s very aggressive. Then today I was fully alongside him and he didn’t leave me any space. But, regardless of whether I agree with the penalty, I take it on the chin and I just kept working. I was like ‘I’m not going to let anything get in the way of the crowd’s enjoyment of the weekend, the national anthem, and the British flag'”. What a proud moment making this his eighth British GP win. Hamilton is now tied to Schumacher’s eight French GP wins. This was also Lewis’ 99th career win.

Speaking to Sky Sports, Toto Wolff, Mercedes team principal mentioned, “It always takes two to tango and these two are not giving each other an inch and it’s a high-speed corner and these things are nasty to look at but there is a clear regulation. if you are a racing driver, you may have a different perspective in the car. But you need to understand that if the front axle is over the middle of the car on the outside it’s your corner and you can say its that the corner that is equivalent to any other? Maybe not. An accident involves two drivers. They were racing each other hard and you must take that. The stewards expressed a penalty and you must take that and take that because it was high speed. It is what it is.”

After today’s results, Max Verstappen continues to lead the driver standings with 185 points and Lewis Hamilton has 177 points. The gap is closing. The constructor standings show Red Bull with 289 points and Mercedes with 285 points. Let’s see who keeps up that race pace and if there’s respect on the track next time. Get hype for the Hungarian Grand Prix. The round 12 race is the weekend of 30 Jul-01 Aug.