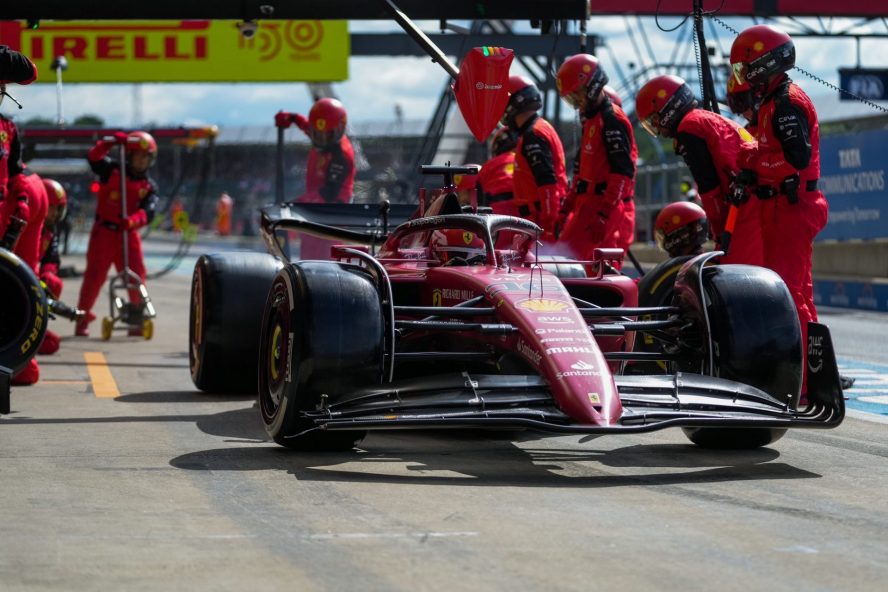 The British Grand Prix proved to be another dramatic race with Mattia Binotto looking to have a firm word with Charles Leclerc at the end.

The Monagesque was leading the race when Esteban Ocon’s Alpine lost power at the finish line and forced a safety car. Both Ferraris were running on hard compound tyres but only Carlos Sainz was brought in to change for softs. Both cars were being hunted down by Lewis Hamilton, who Mercedes also brought in for a tyre change.

As the safety car came to an end, Leclerc tried to get ahead while the cars behind him battled it out. Carlos Sainz, Lewis Hamilton, Sergio Perez, Fernando Alonso and Lando Norris were all in the running on the soft compound tyre while Leclerc had to keep with the hard.

Carlos Sainz eventually overtook his teammate and Leclerc found himself in a certain difficulty while being hunted down by the Mercedes and Red Bull. Sergio Perez controversially overtook Leclerc while forcing him off the track, while Lewis went up to second. The three kept battling out but Leclerc’s 22-lap-old tyres were not strong enough to keep up with the fresher softs.

This left Charles Leclerc unhappy and somewhat angry at his team.

Charles Leclerc had been telling his teammate that he was quicker than his teammate throughout the whole race. Eventually, they did swap places but when the safety car happened, Leclerc fumed over the fact that his tyres were not changed.

He felt that he lost a good opportunity to bring more points to the Ferrari garage. Once the race finished and everyone was cooling down and congratulating Sainz for the win, Binotto and Leclerc seemed to be having a word.

Sky Sports commentator David Croft explained the scene, “That’s Binotto saying, “Whatever you do, do not criticise the team.” Sky showed Binotto and Leclerc talking, with the Ferrari Team Principle pointing his finger at Leclerc. Co-commentator Martin Brundle added, “That was definitely a finger-wagging, wasn’t it.”

Charles Leclerc was asked about his thoughts on the race and what has been said with his team. The Monagesque said, “The amount of race time we have lost in this race is… oh my god. The only good thing today is that Carlos won. But freaking hell. Guys. Enjoy the victory.”

Then he was asked about Binotto and Charles added, “Well, obviously, he wanted to cheer me up. And that’s it. I will have a look at the global picture. Now on my side, I only have my picture of my race, and obviously, in the race, sometimes in the car, you don’t have the full picture.

“On my side, I feel like I’ve lost a little too much in the first stint, especially, and in the first part of the second stint. But this is only my view, and it might change once I see the full picture.”