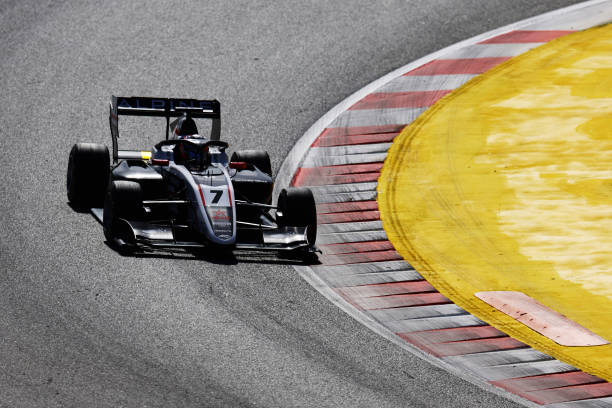 BARCELONA, SPAIN - MAY 22: Victor Martins of France and ART Grand Prix (7) drives on track during the Round 3:Barcelona Feature Race of the Formula 3 Championship at Circuit de Barcelona-Catalunya on May 22, 2022 in Barcelona, Spain. (Photo by Alex Pantling - Formula 1/Formula Motorsport Limited via Getty Images)

Following a penalty for missing the weighbridge during Friday’s qualifying Trident’s Zane Maloney starts the Feature Race from the pit lane.

Roman Stanek on pole with Victor Martins beside him on the front row.

Martins had an incredible start making an impressive overtake on Stanek going into Turn 1. PREMA’s Arthur Leclerc has a difficult start dropping four places to P9.

Behind VAR’s Reece Ushijima is forced wide into the gravel at Turn 11 but makes it back onto the track.

Further, into the midfield, VAR’s Rafael Villagomez finds the wall after making contact with Kush Maini. As a result, putting Villagomez out of the race and bringing out the safety car. After an investigation from the stewards, Maini received a 10-second penalty.

Lap 7 saw the safety car coming in, Martins controlling the restart and maintaining his position.

Moving into the midfield both Jak Crawford and Caio Collet pass Kaylen Frederick dropping him down into P8.

Progressing to Lap 11 the two ART’s battle for position Juan Manuel Correa coming out on top. Further down the track, Benevides makes contact with the wall at turn two putting himself out of the race and bringing out the safety car.

As the safety car came in at the end of lap 14 Martins retained his lead once again. Behind Leclerc battles with Sprint Race winner Vidales for position into Turn 1. The pair making contact forcing Vidales to retire while Leclerc drops to P12. Leclerc received a five-second penalty for the move.

With Leclerc eager to gain back lost positions he passes Saucy on Lap 16 to take P11. Further back the two Campos’s of Yeany and Marti collide seeing Yeany given a 5 second penalty.

Meanwhile, at the front of the field, Martins began to pull away from Stanek with a 1.5-second gap.

Leclerc takes his chances once again passing Correa on the grass down the main straight on Lap 20. This however was short-lived as Correa passed him once again by the end of the lap. His teammate however battling with Leclerc for P11 throughout the final laps however Leclerc maintained his position.

At the front of the field, Martins takes the chequered flag reclaiming the championship lead as well as his second F3 win. Behind him followed Stanek taking P2 and Hadjar behind claiming the final podium position.

The point scorers lined up as follows:

Formula 3 returns for Round 4 at Silverstone (1st-3rd July)