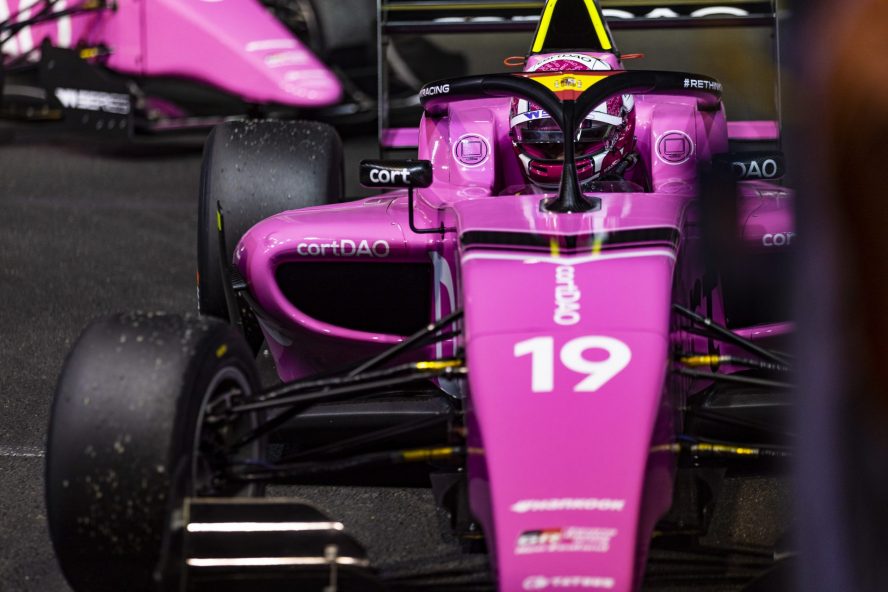 The session was later suspended due to the weather conditions

A wet qualifying in Singapore for W Series saw CortDAO driver Marta Garcia conquer the pole position for tomorrow’s race before the session was stopped due to the track’s conditions.

When it rains, it really pours for the W Series drivers, who had to immediately go full out at Marina Bay during qualifying under the Singaporean rain. The beginning of the session saw Alice Powell at the top of the timing sheets with Belen and Marta Garcia behind. The latter eventually managed to better her timed lap and jumped in first with a 2:30.762.

Championship leader Jamie Chadwick, who has the chance to clinch her third title this weekend, seemed to struggle to pick up the right pace. Moreover, already giving some wheel-to-wheel racing early in the weekend the Brit had a close moment with rookie Bianca Bustamante due to traffic. Chadwick will hence only start from eighth and, with uncertainty regarding the end of the season, a masterclass drive will be needed if she hopes to win the Championship under the lights of Marina Bay.

A spin in the rain for @belengarciaes, but she saves it and continues on. 💪#WSeriesSingapore 🇸🇬 #WSeries #SingaporeGP pic.twitter.com/NBS71Z9dL1

The aforementioned weather conditions not only did not improve but even got worse, forcing the Series to be red-flagged with CortDAO driver Marta Garcia at the top of the timing sheets. The session was resumed with ten minutes to go but eventually had to be stopped once again as the track’s conditions remained critical. Garcia hence kept the pole position and will start from the front row. Next to her, Beitske Visser will start in second and Alice Powell in third.

Noteworthy was also Ayla Agren’s performance, as the Norwegian driver was called in for her role as reserve driver to replace Tereza Babickova, who got injured during a FRECA race. Agren will start from thirteenth on the grid, a good result considering the track and the tricky conditions.

The final classification is as follows: