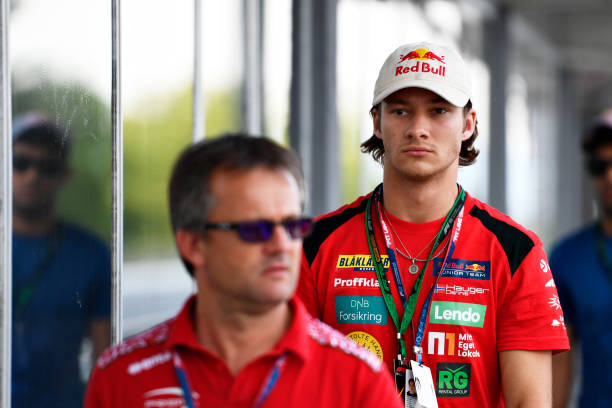 BUDAPEST, HUNGARY - JULY 28: Dennis Hauger of Norway and Prema Racing (1) walks in the Paddock during previews ahead of Round 10:Budapest of the Formula 2 Championship at Hungaroring on July 28, 2022 in Budapest, Hungary. (Photo by Rudy Carezzevoli - Formula 1/Formula Motorsport Limited via Getty Images)

Marko says Hauger is next in line to replace Gasly

Dennis Hauger is the next driver in line for an AlphaTauri seat following Juri Vips’ termination from the junior academy, according to Helmut Marko.

Vips was Red Bull’s test and reserve driver until a few months ago when he was let go for using a racial slur on a Twitch stream. He would likely have been Red Bull’s first option if the need arose to promote a junior driver to Formula 1. Now, without him, it seems like Hauger is the new number one pick.

In an interview with Motorsport.com, Marko spoke about the decision to fire Vips. He stated that Red Bull had no choice but to remove the Estonian from their driver academy due to backlash from the media.

“The English media unleashed such a sh*tstorm that Red Bull Racing had no choice but to remove him from office. I personally think he is 21 years old and has apologised.”

Vips did issue a statement of apology following the incident via an Instagram story. While Red Bull terminated his contract with their team, Vips remained in Formula 2 with Hitech Grand Prix.

Marko mentioned his frustration with the situation, citing the fact that Vips was playing a video game as something that was a problem.

“What bothers me is that it happened during a stupid video game because they have nothing better to do in the afternoon. I don’t understand how you can do that for more than two minutes, but hey, that’s the youth. I can’t do anything with it. Max does it too with sim racing.”

Oddly, Hitech team principal Oliver Oakes cited a similar concern in the team’s statement about Vips. He said “I don’t know why he was streaming C.O.D. at that time of day. Certainly, there are things that would have been far more beneficial for his career!”

Is Hauger the new favourite?

With Vips previously touted as a favourite to inherit a seat at AlphaTauri, Red Bull needs a new first option.

Pierre Gasly has been rumoured to be leaving the Red Bull second team after 2023, if not even earlier. While no one knows where silly season will leave the team, Red Bull has to be prepared.

When asked who was next in line for the AlphaTauri seat should Gasly leave, Marko mentioned Formula 2 driver Hauger as the option.

“Dennis Hauger has dominated Formula 3 in an incredible way,” said Marko. “He now has ups and downs in Formula 2, he is not constant. Performance and nothing else is the deciding factor. That is changeable.

“People who we thought could do it suddenly couldn’t do it anymore and vice versa. That is why it is difficult to make predictions.”

Currently, Red Bull has four junior drivers in Formula 2. Jehan Daruvala, Liam Lawson, and Ayumu Iwasa race alongside Hauger in the category. Of the four, Hauger is actually the lowest in the standings, sitting 12th with 67 points.

Daruvala, Hauger’s Prema Racing teammate, is the highest placed in fourth. Then it’s Iwasa in seventh and Lawson in eighth.

Fortunately for Red Bull and Marko, Gasly has a contract with AlphaTauri for 2023 and will most likely remain with the team. That gives them at least another season to assess which, if any of those four drivers, is the most deserving of a Formula 1 seat.