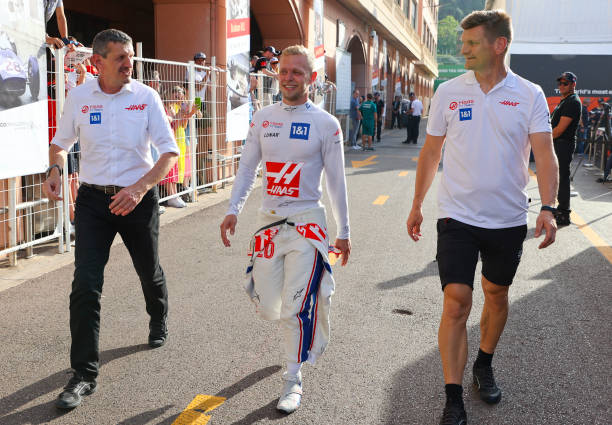 The Haas F1 Team has seen more success so far in 2022 than they have in the past two seasons put together. As the American team has begun to fight in the midfield for the first time in a while, their two drivers are in two very different situations.

Kevin Magnussen has enjoyed his last minute return to the sport, citing positive changes in the environment and development at Haas. Meanwhile, Mick Schumacher has faced more difficulty and pressure in his fight to score his first ever points in F1. The German driver now has an experienced and talented teammate as his new standard.

Magnussen on positive changes at Haas

After losing his seat in Formula 1 at the end of 2020, Magnussen found himself back at Haas for 2022. The season he missed out on was one that Haas is happy to forget, as they finished last in the standings with no points to their name.

Magnussen scored a great result for Haas in his first race back, making it to Q3 on Saturday and going on to finish fifth. Two other points finishes in Jeddah and Imola puts him at tenth in the standings ahead of the eighth round of the championship.

In Spain this year, the team achieved something they hadn’t done since the Brazilian Grand Prix in 2019, getting both cars into Q3. It’s clear to see that the American team has made massive strides since last season.

Magnussen has attributed this change largely to the new base that the team has in Maranello. Due to the budget cap, Ferrari relegated some team members to work for Haas at a brand new base starting last season.

“Yeah, that’s been a nice change in the team,” said Magnussen. “The year I’ve been away, they’ve moved. It’s a bigger group now in Maranello, I think that helps communication between the different departments, just being able to go and talk to each other.”

“So, it’s better, and it’s also grown, and we have more people and it feels better. And, of course, the car shows that too. So it’s in a good place Haas are pointing.”

For Schumacher, the better car performance and his new teammate means new pressure to perform. His rookie year, he was competing against a rookie teammate in a car that wasn’t able to compete with the rest in the field. Now, he has a car good enough to fight for points and even finish in the top five.

Magnussen has been proving the potential of the car regularly, while Schumacher has been struggling more to find the limit without making mistakes. Recently in Monaco, Schumacher had an accident in the race that broke his car in half and brought out a red flag. Surprisingly, that incident wasn’t even the first time Schumacher had split his car in two this season. He had a similar incident in Qualifying at Jeddah earlier in the season.

While Magnussen is tenth in the standings with 15 points, Schumacher is 19th as one of just two full-time drivers to not score any points.

Two-time Rally Champion Walter Röhrl has commented on this dynamic. Talking to German newspaper Bild am Sonntag, he said  “That is currently bitter for Mick Schumacher, because Kevin Magnussen, who has returned to Formula 1 after a one year break, has him well in hand.”

“That puts additional pressure on him, brings explosiveness into the team, and doesn’t make it any easier.”

Röhrl also cited consequences to come if Schumacher doesn’t improve. “He simply has far too many accidents at the moment, all of which cost a lot, a lot of money. If nothing comes, they won’t keep going indefinitely. Formula 1 is brutal and cold.”