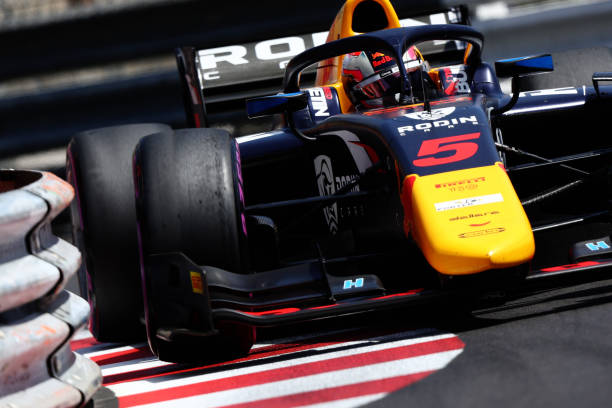 MONTE-CARLO, MONACO - MAY 27: Liam Lawson of New Zealand and Carlin (5) drives on track during qualifying ahead of Round 5:Monte Carlo of the Formula 2 Championship at Circuit de Monaco on May 27, 2022 in Monte-Carlo, Monaco. (Photo by Clive Rose/Getty Images)

In true Monaco fashion, the grid is split into two qualifying groups. Group A consisting of odd-numbered cars and Group B the even numbers. Each group with 16 minutes of track time.

As Group A made their way out onto track Jack Doohan set the benchmark of the installation laps with a 1:26.304.

For the opening half of the session Amaury Cordeel made the most improvement. With just under 10 minutes to go he lead the pack with a 1:23.693.

This however was quickly displaced by Championship leader Felipe Drugovich who set three purple sectors with a 1:21.795.

Doohan put himself in P2 with a 1:22.199 however due to improving track condition he quickly fell to sixth.

With just under a minute left on the clock Boschung clips the wall sustaining damage to the steering leaving him unable to improve.

Further down the track Drugovich clips, the wall in Sector Three bringing out double waved yellows. In this time Liam Lawson had claimed provisional pole with a 1:21.229, Ayumu Iwasa taking P2 with a 1:21.288. Drugovich clinging onto P3.

This however is under investigation as improvements were still made despite double yellow flags being shown.

As the track improved Logan Sargeant set the first representative time with a 1:22.230. This was quickly beaten by Hughes with a 1:22.011 and then displaced by Jehan Daruvala with a 1:21.928.

The session was prematurely ended after Jake Hughes hit the wall just before the swimming pool bringing out the red flags.

Lawson has been stripped of pole position after failing to slow sufficiently during yellow flag conditions. The kiwi driver had his lap time deleted as well as receiving two penalty points and being given a five place grid drop for tomorrow’s Sprint Race

Lawson however was not the only one reprimanded. Iwasa also receives a 10 place grid penalty as well as three penalty points and a deleted lap time.

Amaury Cordeel received another reprimand for unsafe driving however he receives no penalty points.