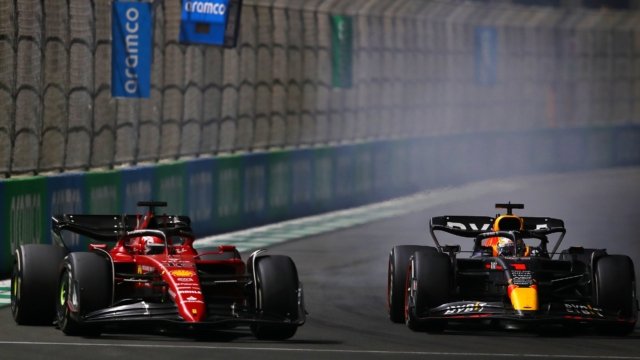 Verstappen and Leclerc open up on a "tough" race in Jeddah.

Charles Leclerc was gracious in defeat in Saudi Arabia as he lost out to reigning champion Max Verstappen right at the end of the Grand Prix in Jeddah.

The Ferrari driver was impressive from start to finish in Saudi Arabia and was helped along by a very well timed safety car, enabling him to change his tires efficiently and claim the race lead.

The Driver of the Day was unable to build on his advantage at the front of the pack which led to a “fun” battle with Verstappen.

Despite being disappointed about losing out on the number one spot, Leclerc was quick to jump on the team radio to praise to his rival:

“Well done to Max, that was nice.”

“It wasn’t enough today, oh my god, I really enjoyed that race!” Leclerc said in his post race interview.

“It’s hard racing but fair and every race should be like this.

Race setups made the difference

Leclerc pointed out the differences in the setups between the Ferraris and the Red Bulls, saying the Scuderias lacked a bit of straight line speed.

“We had two very different configurations [compared to] Max and Checo,” he said.

“We were quite quick in the corners but slow on the straight because we put more downforce.

“So it was extremely difficult for me to cover Max in the straights.

While a Ferrari v Red Bull rivalry may be fairly new for Formula One, Leclerc & Verstappen’s rivalry goes back to their karting days.

“[The respect] has always been there, especially when you finish a race like this,” Leclerc explained

“We’re on a street track, we’ve been pushing like we’ve never been pushing before to the absolute limit and we took risks at the end.

“So of course there is respect but a bit of disappointment.

“I wanted to win today.”

Armed with the RB-18’s straight-line speed, overtaking Leclerc on the straights may have seemed straightforward task for Verstappen, however the Dutchman believes his “smart tricks” were the reason he was able to get past the championship leader.

“We just tried to play the long game,” said the Dutchman in his post race interview.

“It was a really tough but good race.

“I eventually managed to get ahead but even after that he was constantly in the DRS.

“[I’m] really happy that we finally kick-started the season.”

Red Bull will have their chance to close the gap to Ferrari in two weeks’ time when they travel to Melbourne for the Australian Grand Prix.