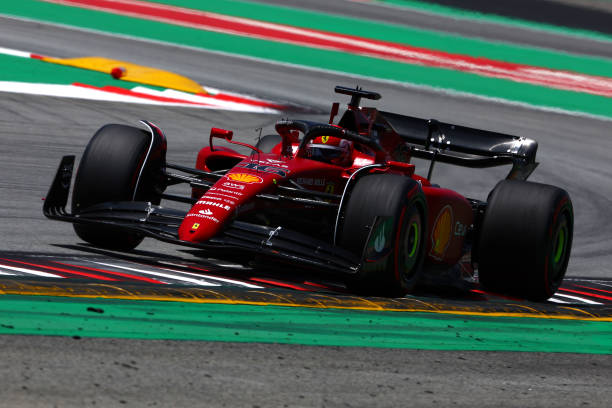 BARCELONA, SPAIN - MAY 21: Charles Leclerc of Monaco driving the (16) Ferrari F1-75 on track during practice ahead of the F1 Grand Prix of Spain at Circuit de Barcelona-Catalunya on May 21, 2022 in Barcelona, Spain. (Photo by Mark Thompson/Getty Images)

After a spin at the beginning of Q3 Charles Leclerc came back to take pole position for the Spanish Grand Prix.

Zhou Guanyu was the first out on the track, as most drivers opted to wait a little longer. Zhou set a 1:21.065 as the benchmark for everyone else.

Perez was quick behind him to break into the 1m 20s. Not long after, Carlos Sainz set a lap time in the 1m 19s. He was quickly displaced by his teammate Charles Leclerc, who set a 1:19.861.

There was an incident on pitlane where Aston Martin’s Lanc Stroll was released directly into the path of McLaren’s Lando Norris. While the two drivers avoided contact, the stewards decided to investigate it after the session.

With six minutes to go, everyone had set their first lap times and went back to the pits to regroup. At that point, the bottom five were Alex Albon, Stroll, Pierre Gasly, Mick Schumacher, and Nicholas Latifi.

With just two minutes left to go the drivers that most needed to improve went back out to secure their spot in Q2. Schumacher managed to improve to ninth, and Pierre Gasly, despite problems in FP3, made the jump to P11.

The shock eliminations were both Aston Martin drivers, who despite their controversial upgrades were unable to get out of the bottom five. Fernando Alonso also didn’t progress in his home race, a disappointment to the fans watching.

There were only eight minutes left in the second session of qualifying when the first representative lap time was set as Lewis Hamilton, put a 1:19.794. His teammate George Russell, however, was right behind him and went three tenths faster.

Valterri Bottas put in a lap good enough for P4, while the Ferrari drivers failed to improve on their Q1 times. With about five minutes left everyone went back into the pits, with Mercedes sitting 1-2 on the timing screen. The bottom five at that point were Ricciardo, Ocon, Zhou, Tsunoda, and Gasly.

Again with about two minutes left on the clock, those drivers that felt the need to improve made their way back out again. Mercedes opted to keep both their drivers in, feeling safe with their times.

Sainz was the first to improve, going P1 with a 1:19.453. Gasly and Tsunoda also both improved, but failed to get out of the bottom five. Next, Verstappen displaced Sainz at the top and set a 1:19.219.

Lando Norris then set a time good enough for P8, but had the time deleted due to a penalty for exceeding track limits at Turn 12. He was put back to P11 , promoting Schumacher into Q3 instead.

Drivers were quicker to get out and set their first lap for the final session of Qualifying. Hamilton was the first driver to set a time but Verstappen quickly went fastest overall with a 1:19.073.

Leclerc spun out during his first flying lap and hurried back to the pits without setting a time. With five minutes left on the clock Verstappen held provisional pole as the Mercedes sat fourth and fifth with Russell and Hamilton.

At three minutes to go Leclerc was the first driver to come back out, anxious to set a representative lap time. As he crossed the line and took provisional pole with a 1:18.750, Verstappen complained of a power issue on the radio and was told to box, ending his session before he had a chance to improve on his time.