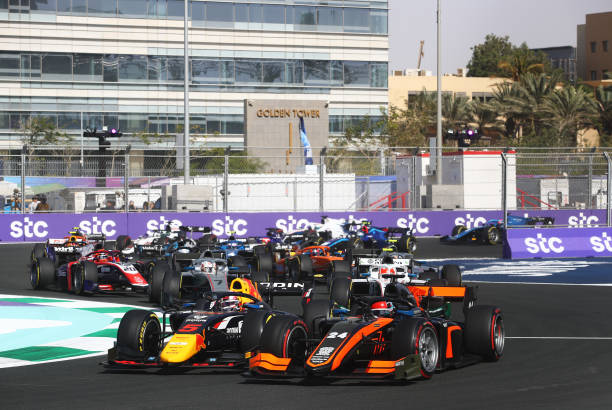 An incident-packed weekend in Jeddah continues as Carlin’s Liam Lawson takes victory in the Sprint Race.

After both practice and qualifying for Formula 2 were full of accidents, the Sprint Race was no different. Prema’s Dennis Hauger started well from pole following Jack Doohan’s disqualification from Qualifying. He maintained his lead going into Turn 1, followed closely by Calan Williams and Ayumu Iwasa.

While the grid battled hard throughout the pack, there were only two racing laps before the first incident brought out the safety car. While Vans Amersfoort driver Jake Hughes was fighting in the podium positions, his teammate Amaury Cordeel spun out on Lap 2 and hit the wall.

After four laps under the safety car, Hauger led the group away at the restart… which didn’t last very long. Before all the drivers even made it to the start/finish line, Doohan collided with Carlin’s Logan Sargeant, the two taking the restart from 17th and 18th.

Both drivers complained of the pace of the restart, Doohan saying on the radio that “they just went and jumped on the brakes!”

With the cars of Sargeant and Doohan sitting on the start/finish straight, the other drivers were originally instructed to follow the safety car through the pit lane. It immediately became clear, however, that Sargeant’s car was blocking pit entry, and race control issued an order to close the pit entry. While the cars were instructed to follow the safety car down the start/finish straight, the race leader, Hauger, didn’t get the new message in time and drove through the pit lane while it was closed.

Hauger fell down the order to 11th on the grid, and Williams inherited the lead. Later, Hauger received a 10 second stop and go penalty for failing to follow race control instructions, and lost even more places after the restart.

By Lap 13 only one full lap of racing had been completed. But the safety car was coming in and Hughes was close behind Williams on the soft tyres. When the race finally restarted, Hughes overtook Williams for the lead going into Turn 2, and Williams fell back to third after losing out to Lawson as well.

There was an uncharacteristic calm for the next couple of laps, but on Lap 18 Lawson caught up to Hughes, who was struggling as the soft tyre degraded. He passes Hughes, and took the race lead with two laps to go.

Not long after, Hitech’s Marcus Armstrong spun out from seventh position, and was unable to keep his engine going. The virtual safety car came out, and that looked like the end of the race.

But Armstrong’s car was cleared quickly, and on the final lap of the race the flag went green once more. Lawson held the lead, but Juri Vips came up from third to fight with Hughes. As Lawson crossed the finish line the two drivers behind him could be seen drag racing to the line. In the end, Vips took it by a small margin, and Hughes finished third, scoring his maiden Formula 2 podium.

As the top eight score points in the Sprint Race, the rest of the points finishers were Drugovich, Williams, Verschoor, Iwasa, and Daruvala.

Formula 2 will return tomorrow for the Feature Race, which will surely be just as chaotic.