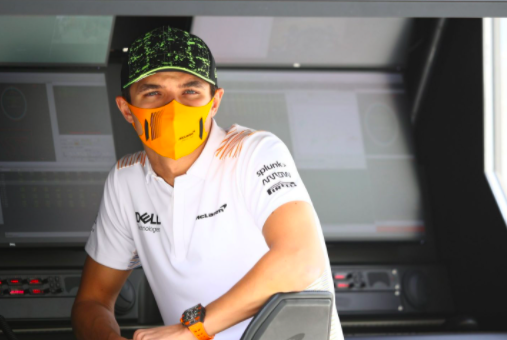 Lando Norris revealed how he handled his mental health while racing in Formula 1.

The British driver expressed his true feelings during his athletic journey.

Lando spoke on the ITV show, This Morning to explain what goes through a driver’s mind.

Norris shared, “I guess people, from when they just watch TV, don’t realise many things that a driver goes through. And it’s a bit of shame, but there are more programmes now where you get to see what the driver is like behind the scenes, and the amount of pressure and stress that they have to cope with.”

Starting professional racing at age 19, there were lots of eyes watching. Lando had to deal with all sorts of things that took a toll on him. That massive amount of pressure to do well with a grand opportunity.

Lando said, “It was feeling like I don’t know what’s next? If this goes wrong, if I don’t go out in the next session and perform, what’s going to happen? What’s the outcome of all of this? Am I going to be in Formula 1 next year, if I’m not? What am I going to do because I’m not really good at many other things in life?”

Norris added, “So, just all of that, and then just feeling depressed a lot of the time that if I have a bad weekend, I just think I’m not good enough and things like that. When they start adding up over the season and then the social media side of it all, that can just really start to hurt you.”

By Grace Robinson12 hours ago

The 21-year old has a full support system from the McLaren team, family, and friends as well as partnering with the mental health charity, Mind. This has helped him to get to a better and happier place now.

The expectations are high but the Bristolian tries to stay in the right headspace. Coming off an amazing 1-2 finish and pole position propelled him to want to do more.

Norris noted, “So a lot of people are expecting amazing things. But we have to limit them in a way because we’re still realistically not as quick as Mercedes and Red Bull, which are the leading two teams at the moment. We still have a lot of work to do but every race is an opportunity.”