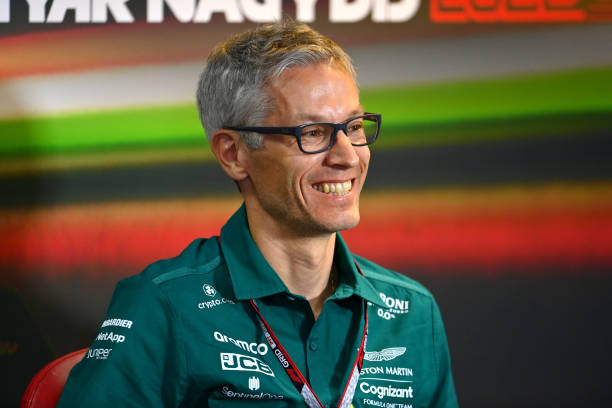 BUDAPEST, HUNGARY - JULY 30: Mike Krack, Team Principal of the Aston Martin F1 Team attends the Team Principals Press Conference prior to final practice ahead of the F1 Grand Prix of Hungary at Hungaroring on July 30, 2022 in Budapest, Hungary. (Photo by Dan Mullan/Getty Images)

He believes the team can benefit from Alonso’s “killer instinct”, and that he’ll help drive the team towards what they’ve been hoping to achieve the past couple of seasons.

Just days after Sebastian Vettel announced his retirement, Alonso was announced as his replacement for 2023. This move was surprising to many who expected Alonso to resign with Alpine, Alpine included.

Alpine’s team principal Otmar Szafnauer admitted to being blindsided by Alonso’s move. He commented that the team was keen to keep the World Champion and that they thought he felt the same.

While Alpine is now stuck trying to find a driver to partner Esteban Ocon for 2023, Aston Martin is delighted to have Alonso on board.

Krack has spoken very highly of Alonso and highlighted their choice to sign him by saying, “He just has that killer instinct. No matter what, you know that Fernando will always give you everything: always push 100 per cent, always extract the maximum from the car and the team. His racecraft is exceptional – a formidable combination of confidence, instinct, and intelligence.”

Aston Martin has had a successful and experienced Formula 1 driver in Vettel driving for them since 2021. Even though he has struggled to score points and has had a tough time the past two seasons, the team is clearly happy to have his experience.

Signing Alonso gives them yet another very experienced and highly knowledgeable driver filling that seat. They have reportedly offered him a very high salary, further implying that they’re very keen to have another driver like Vettel on the team.

While Alsonso is the oldest driver currently on the Formula 1 grid, Krack has made it clear that he is an integral part of their plan for the future.

“Signing Fernando is a clear statement of our intent at Aston Martin F1. We are not on the grid to make up the numbers. We are here to win.

“We are on a journey to the front of the grid and Fernando’s decision to join us on that journey – to have a driver of his calibre believe in the Aston Martin F1 project – is a great compliment to our team and the work we are doing.

“He will demand a lot from us, but that’s to be expected from a multiple World Champion. Fernando will be a driving force as we climb together and, like everyone in the team, I cannot wait to work with him.”

Alonso will be partnering Lance Stroll next season. The team will be hoping to make a substantial jump up the grid. Currently, the team is ninth in the constructor’s standings with 20 points.