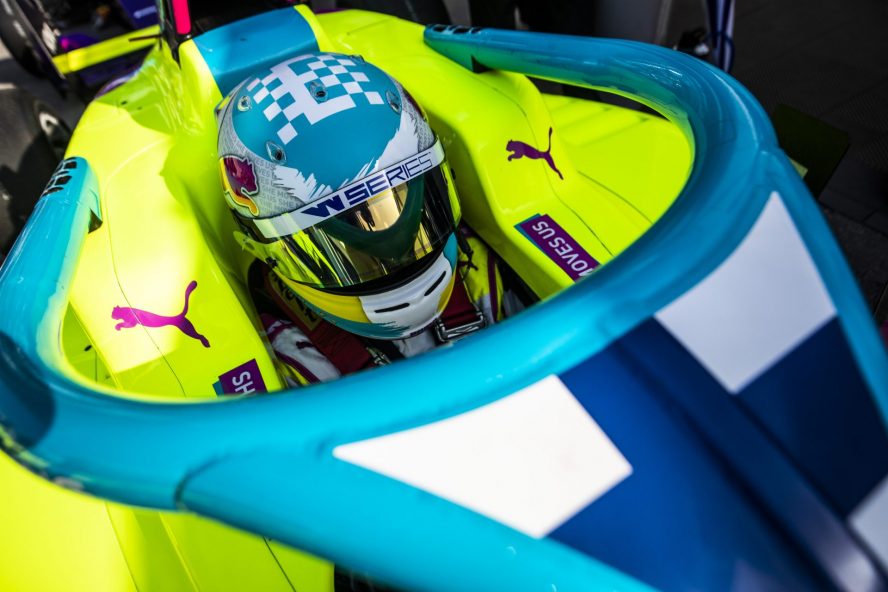 Emma Kimilainen’s first race of the season was far from ideal, as the Finn, who started the race in fourth, lost the lead on the last lap and ended up spinning following contact with podium-sitter Marta Garcia. The 32-years-old later took to social media her frustration and opinion on what happened.

A drama-packed race was only the first stop of a W Series season that promises more action than ever, at least from the first signals from yesterday. At the start, polesitter Nerea Marti stalled as well as 2021 runner-up Alice Powell. Puma driver Emma Kimilainen, who started from fourth, immediately showed some serious pace, attacking Jamie Chadwick for the lead before the red flag.

Once the race was restarted, Kimilainen’s pace proved superior as she was able to successfully maintain the lead from Chadwick. Showstopping moments were, however, not over as an incident between CortDAO Fabienne Wohlwend and Scuderia W Abbie Eaton brought out the safety car once again. In an Abu Dhabi-style last lap shoot out, Kimilainen lost the lead to the Reigning Champion and then ended up spinning on track due to contact with Marta Garcia.

Kimilainen expressed her frustration with the result on social media, admitting to having had technical issues on the restart: “I suffered from a power cutting issue at the worst possible moment when exiting the last corner to restart the race. So the engine was coffin and the power just went like cut cut cut cut cut… I moved off the line for precaution if the engine will come to a complete stop. Then it just suddenly got running again but slowly and obviously the car behind, Jamie, was able to come besides me. I then made a mistake in the braking for the first corner when being on dirty inside line and dropped down to third.”

Regarding the contact between Kimilainen and Garcia, the Spanish driver believes the accident was a simple racing incident, as admitted to F1 Feeder Series: “From my side, I think Emma [Kimilainen] was maybe a bit too ambitious. I think she just started to overtake me on the outside which normally doesn’t end well many times but I mean you gotta try at the end of the day so I think it was a racing incident.”.

The final view from the Finn, however, isn’t of the same opinion: “I had once again mega speed and tried to overtake the car infront, Marta [Garcia], already earlier that last lap but succeeded in the last corner from outside. As the stewards also deemed, I left space for her to race clean and maintain the inner line easily but she was not able to do the same for me so she sadly hit my rear tyre when we exited the corner and spun me around (10 sec penalty for her in the end). So gutted for both of us!”.

While the drivers will have the possibility to recover today during the second race of the weekend at 15:35 GMT, Kimilainen, who is considered one of the clear favourites for the Championship, remains disappointed in the result: “It’s a Championship that I’m trying to win and we only have ten races so there is no room for any error like this. So the worst possible start of this season I must say, very gutted!”