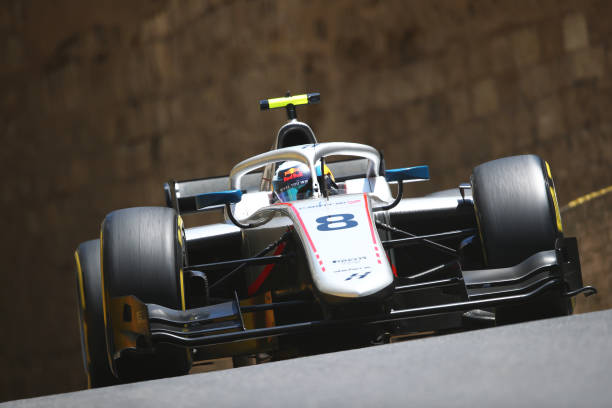 BAKU, AZERBAIJAN - JUNE 10: Juri Vips of Estonia and Hitech Grand Prix (8) drives on track during practice ahead of Round 6:Baku of the Formula 2 Championship at Baku City Circuit on June 10, 2022 in Baku, Azerbaijan. (Photo by Joe Portlock - Formula 1/Formula Motorsport Limited via Getty Images)

Jake Hughes took to the track first getting qualifying underway around the very windy streets of Azerbaijan.

Ralph Boschung brings out the yellow flags after going off at Turn Three but manages to keep the car going and returns to the track.

With 15 minutes remaining the cars started to make their way into the pits for the first break. Despite what we have seen previously in the season no driver choose to utilise the gap in track running.

With just under 12 minutes left on the clock, the grid starts to peel out of the pitlane for their second run of flying laps.

With 5 minutes remaining the provisional pole sitter Iwasa brings out the red flags after hitting the wall at the exit of Turn Four.

As racing resumes Hauger is noted for an unsafe pit release which will be investigated after the session.

With the track conditions ever-improving the pace of the grid increases with Hauger taking provisional pole with a 1:53.973.

Hauger was quickly displaced by Juri Vips setting an incredible lap and putting himself on provisional pole with a 1:53.762.

In the mid-field, a flurry of times were being set however Richard Verschoor took the fastest time claiming P6 with a 1:54.029.

As the chequered flag is waved the grid remained very much as it was apart from Liam Lawson. Lawson on a flying lap crossed the line with a 1:53.925 taking P2 and lining up beside former teammate Juri Vips on Sunday’s Feature Race.

Championship leader Drugovich was unable to improve, qualifying P5 with a 1:54.000. Further down his championship rival Theo Pourchaire didn’t have the qualifying run he would have hoped for, crossing the line in P12 with a 1:54.440.

By Grace Robinson1 week ago