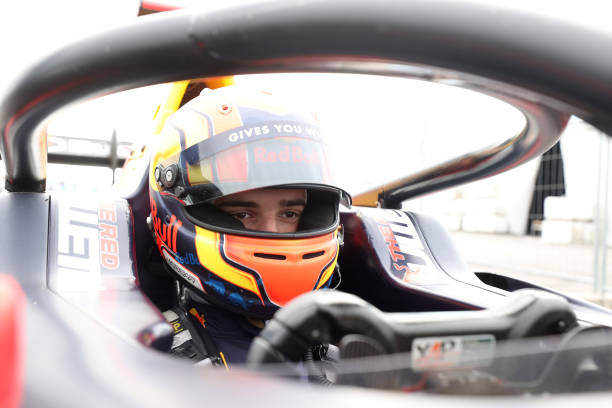 SOCHI, RUSSIA - SEPTEMBER 26: Jonny Edgar of Great Britain and Carlin Buzz Racing prepares to drive during race 3 of Round 7:Sochi of the Formula 3 Championship at Sochi Autodrom on September 26, 2021 in Sochi, Russia. (Photo by Alex Grimm - Formula 1/Formula Motorsport Limited via Getty Images)

The Red Bull Junior driver will return to Formula 3 at Silverstone.

Johnny Edgar will return to his Formula 3 campaign with Trident after previously withdrawing due to health issues.

After a strong start to the season, Edgar was forced to withdraw from Formula 3 after being diagnosed with Crohn’s Disease in April.

The Trident driver took to Twitter today to make the announcement that he’d be returning in time for his home race.

‼️ Delighted to announce that I will be resuming my @FIAFormula3 campaign with @trident_team next weekend at @SilverstoneUK.

Following my Crohns diagnosis and period of illness, I have now improved sufficiently to make my return to racing.#RedBull #RedBullJuniorTeam #F3 pic.twitter.com/vYTxDqxrgv

Speaking to Formula 3, Edgar discussed his recovery: “I’m really happy to be back. I didn’t expect to be back this quickly. From what the doctor that we spoke to said and also just how I felt, I thought it would be a lot longer before I’d be back.”  He added “once I started improving, I improved pretty quickly and then started training again. My fitness is obviously not what it was, but I’ve got back to a good enough level pretty quickly I’d say.”

Edgar commented that he found out four weeks previous that he’d be racing at Silverstone. The British driver recalled “Trident called up and asked me if it was possible and if I wanted to come back. It took a little bit to decide because I didn’t know if I’d be fit enough but I was improving still. We decided that I’d be fit enough to be able to race. Obviously, since then, I’ve improved more and more so I think it should be okay.”

In his time away Edgar has been working on his fitness. However, he still feels “the races, especially Silverstone, will be hard.”

In preparation, the British driver has been spending time in the Red Bull simulator. He has also flown out to Trident to ensure the car is prepared.

Giacomo Ricci, Team Manager at Trident commented on Edgar’s return saying, “I am extremely delighted to share this amazing news. I have no words to express how happy I am to welcome Jonny Edgar back and be able to follow him on track again.”

Ricci then went on to add “We are absolutely thrilled to know that the British racer, a Red Bull Junior driver, has finally overcome his health issues, winning a battle that will make him even stronger.”

He concluded by saying “Trident Motorsport will follow his return with its maximum commitment to help him recover the time he missed in two rounds he was forced to sit out from.”

Despite Silverstone being Edgar’s home race, he has yet to have raced there during his single-seater career. He commented on this saying “It’s quite nice. I’ve never actually raced at Silverstone in single-seaters because I raced in Italy and in Germany.”

He concluded by saying “Obviously, it still depends on a lot because there’s traffic in Qualifying and there’s a lot of other factors to it. I think in the end, even if I got unlucky but the pace was good, I’d be happy with that for the first weekend back.”

Formula 3 returns next week (1st-3rd July) at Silverstone for Round Four.