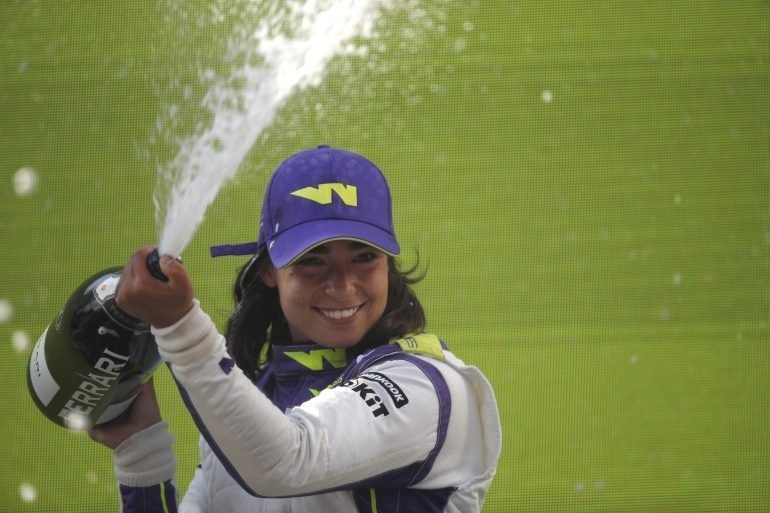 The W Series 2021 season has come to an end and Jamie Chadwick has been crowned once again the Champion. On the podium, the Brit was joined by Abbie Pulling and Emma Kimilainen.

Before the start of the race, W Series announced drivers Abbie Eaton and Marta Garcia would not have taken part in the final race of the season due to health issues. Formula Nerds would like to wish a speedy and safe recovery to both.

Jamie Chadwick had a perfect start from pole position, with Championship contender Alice Powell up to seventh already during the first lap. Down the grid, fan-favorite Fabienne Wohlwend heavily hit a curb at the start and started dropping down the field, ending up retiring the car.

The 2019 Champion continued building a gap with an outstanding pace. Meanwhile, Powell seemed stuck in seventh behind Belen Garcia despite multiple bold tries.

In the fight for the podium, Sarah Moore conquered the fourth position with a brilliant overtake at turn 1 on Beitske Visser. Jess Hawkins and Sabre Cook spun as a consequence of contact at turn 12.

Finally, Alice Powell was able to pass Belen Garcia, with the Spaniard running wide. However, the effort wasn’t enough to really contest Chadwick’s chances of victory, as the Brit gained a five seconds gap from Abbie Pulling in second place.

In the end, Jamie Chadwick passed first under the chequered flag to win her second W Series title with nothing short of a perfect drive.