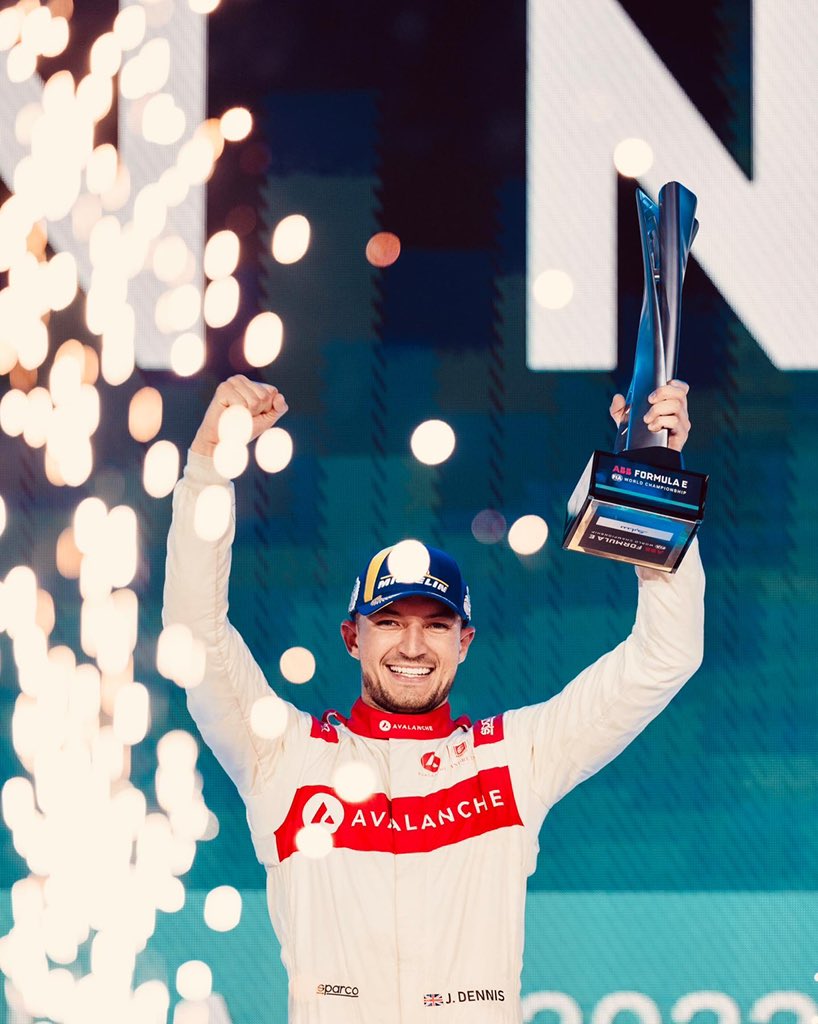 Grand Slam for Dennis at the London E-Prix

Jake Dennis wins his home E-Prix in London, after starting from pole, and went on to have a great race in his Avalanche Andretti, which also got him the fastest lap.

Stoffel Vandoorne didn’t pressure Dennis as much to gain first place, as he sat comfortably in second, while his title contenders Edoardo Mortara, Mitch Evans and Jean Eric-Vergne were struggling at the back.

His teammate, Nyck De Vries, followed in third to earn Mercedes EQ a double podium finish. This is what went down in Round 13 of Formula E in London.

Jake Dennis had a great start ahead of Vandoorne behind him as he blocked him off well into turn one to keep the lead. Meanwhile, Sam Bird was forced out of the race as he got tangled up in the cars at the race start. The tangle left some debris on the track, which came in the way of some drivers during the race. Porsche’s Edoardo Mortara was also involved in the chaos and had to go into the pits early to change his front wing.

Nyck De Vries, Sergio Sette Camara and Oliver Askew all kept their starting place at the start, before the Brazilian went on to perform a great overtake at turn one. At the back, even though Mortara had to pit early and lost precious time, he started gaining speed, being almost a second quicker than the leaders.

Going into turn one at the race start, Dennis blocked any opportunity for Vandoorne to overtake and kept the lead in his home race. After the first 15 minutes, having taken already one attack mode, he kept his lead. Stoffel Vandoorne wasn’t pushing as hard, and so there wasn’t as much pressure on the Brit – who also won at home last year.

At 23 minutes, both drivers decided to go into attack mode, with the Mercedes EQ team ordering Vandoorne not to question it and use this advantage speed. This is because the championship leader was at risk of being overtaken by De Vries and Sette Camara, who were flying behind.

Vandoorne received a fan boost which gave him an advantage against Dennis. But the Brit was determined to win on home soil, and as soon as that was announced, he recorded the fastest lap.

Meanwhile Jake’s teammate Oliver Askew was also running in the points, staying in fifth from where he started. The American – whose experiencing his debut season in Formula E – had a very clean race with a good pace throughout. He was eventually overtaken by Nick Cassidy, who was very fast after applying his attack mode.

Yet to score points, Sergio Sette Camara went into the E-Prix weekend strong. Finishing first in practice, and fourth in qualifying, the Brazilian was making De Vries’ race very difficult. In the first five minutes of the race, he performed a great overtake on De Vries to get him into third place. But when he went to go into attack mode, he lost it once again.

The attack mode was not enough for him to get him close enough to overtake De Vries again, but that doesn’t mean that the race stopped there. At 25 minutes left, the two went into attack mode once again together. Against De Vries, Camara started struggling for power but he kept the chase going.

Sette Camara edged away from De Vries but was then put under pressure by Nick Cassidy, who was running strong on attack mode. He went on the inside at Custom House and eventually overtook the Brazilian. Later on, Cassidy started eyeing a podium finish and started his hunt for De Vries in the Mercedes. De Vries was hurting his tyres trying to defend against Cassidy. The battle kept going until the last lap, and Cassidy almost hit the wall as they were going into turn one. The New Zealandic was very close to De Vries but De Vries stayed strong to make sure to keep his podium.

Sette Camara was losing power during the race and was eventually down to seventh. He had Evans – who was almost out of his attack mode – putting pressure on him too, especially since he needs crucial points. The Brazilian lost power at the last lap and lost his position in ninth, which saw him not score any points – which would have been the first this season.

Vandoorne kept his first place as he finished second in Round 13 of the Formula E.

Mitch Evans was being told “mega pace” in the last 14 minutes of the race. As the title race clenches towards the end, the Brit was running in eighth in Round 13 of Formula E. Jean Eric-Vergne and Edoardo Mortara were both involved in the chaos at the race start, which caused them to lose very important points.

Eric-Vergne was already unhappy after he started in 13th, after a poor qualifying while Mortara only managed to start from ninth. The clashes at the race start affected both drivers, and they could not do much throughout the race to improve their championship position and pressure Vandoorne, who was comfortable in second during the race.

Mitch Evans applied attack mode and managed to go up to sixth.