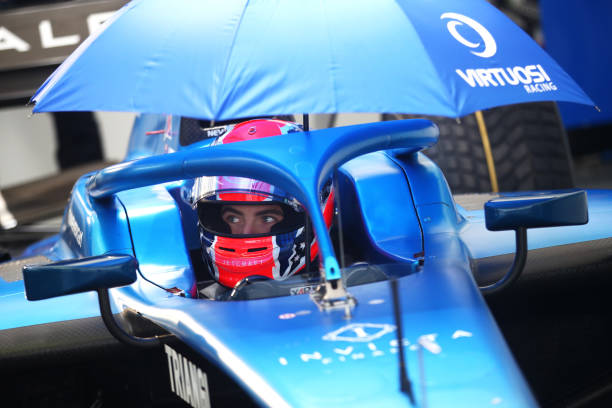 IMOLA, ITALY - APRIL 22: Jack Doohan of Australia and Virtuosi Racing (3) prepares to drive during practice ahead of Round 3:Imola of the Formula 2 Championship at Autodromo Enzo e Dino Ferrari on April 22, 2022 in Imola, Italy. (Photo by Joe Portlock - Formula 1/Formula Motorsport Limited via Getty Images)

Alpine Academy member and Formula 2 pilot Jack Doohan will get his first F1 test this week at the Losail International Circuit in Qatar.

Jack Doohan made the switch to the Alpine Academy for the 2022 season after departing the Red Bull Junior Academy. Doohan finished vice champion in Formula 3 before making the move to Formula 2 for the last two races of the 2021 season. Here Doohan made quite the first impression clinching 7 points during the final two rounds. During the final round at the Yas Marina circuit Doohan qualifed P2. This put him only two tenths off 2021 Championship winner Oscar Piastri.

Since making the move to the Alpine Academy Jack’s F1 duties have been stepped up. For the duration of the Australian Grand Prix Doohan took the role of Simulation driver the first big step up to F1.

Doohan is set to test the Alpine A521 around the Losail International Circuit on Saturday 15th May. Here he will be joined by Alpine reserve driver Oscar Piastri who has already completed two days of running as well as a private test in COTA.

This will be the first time the Aussie will drive an F1 car saying he is “super excited”.

Doohan goes on to say “This is a moment that I’ve been building up to ever since I started racing karts, and I know these opportunities are extremely privileged”

Alpine have been impressed with Doohan’s commitment to the programme and his progression. Alpine Academy’s director Julian Rose commenting. “We’re very pleased to give Jack his first run in a F1 car. Since he’s joined the programme at the start of the year, we’ve seen Jack develop and grow very quickly”

The season so far.

The Aussie although still in his rookie year has shown great potential, qualifying on pole during Round 1 in Bahrain. Luck hasn’t however been on his side after collecting damage during the Feature Race he finished 10th. This continued into Round 2 in Jeddah where he was disqualified from Qualifying after the team failed to provide a sufficient fuel sample. Finally, in Round 3 in Imola he collided with PREMA’s Dennis Haugher putting him out of the race.

Doohan currently sits 17th in the Driver’s Championship with 6 points. Virtuosi sit 11th in the Team Standings with 7 points.