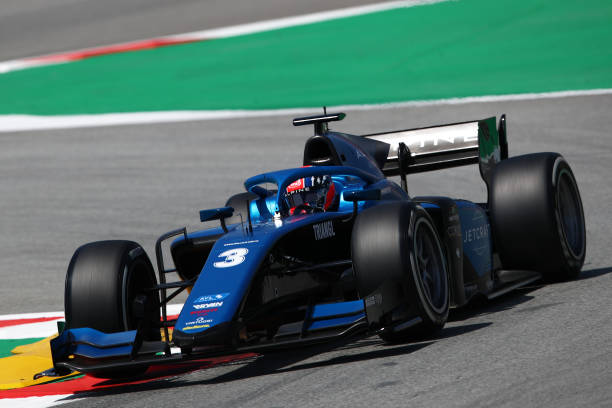 BARCELONA, SPAIN - MAY 20: Jack Doohan of Australia and Virtuosi Racing (3) drives on track during practice ahead of Round 4:Barcelona of the Formula 2 Championship at Circuit de Barcelona-Catalunya on May 20, 2022 in Barcelona, Spain. (Photo by Joe Portlock - Formula 1/Formula Motorsport Limited via Getty Images)

The Formula 2 grid goes into qualifying a driver down after the withdrawal of Campos driver Ralph Boschung. Boschung chose to withdraw from Round 5 in Barcelona after experiencing ongoing neck pain sustained during Round 3 in Imola.

Theo Pourchaire leads the procession out of the pit lane.

Carlin’s Liam Lawson sets the benchmark time of 1:30.753 however this is quickly displaced during a flurry of lap times.

Taking Advantage of the Track

As the four drivers make their way out onto the track the rest of the grid file into the pitlane. Drugovich sets a good lap taking provisional pole setting a 1:29.190. This however was quickly snatched away by Doohan with a 1:29.147.

Daruvala stayed out on track, taking advantage of the empty conditions. The PREMA driver set a 1:28.884 putting him on provisional pole. Teammate Dennis Haugher claiming P4 with a 1:29.884.

Also on track Marino Sato had his lap time deleted due to breaking track limits.

With 10 minutes left on the clock both PREMA drivers are back in the pit lane and out of their cars. Drugovich also waiting in his car with 5 minutes to go.

Meanwhile out on track Doohan retakes provisional pole with a 1:28.612 ART’s Frederik Vesti following behind him with a 1:28.852.

As the midfield continuously improves Haugher see’s himself pushed down into P14 with Drugovich down in P10.

With two minutes on the clock, Theo Pourchaire boosts himself to P6 with a 1:29.001. He did however feel he was impeded by championship contender Drugovich which will be investigated after the session.

As the chequered flag is waved the Top 3 remained as it was however Juri Vips was on a flying lap. Vips crossed the line setting a 1:28.635 missing out on pole by 0.023 seconds.

The Top 10 will line up for Sundays Feature Race as follows:

The Top 10 will be reversed for Saturdays Sprint Race.