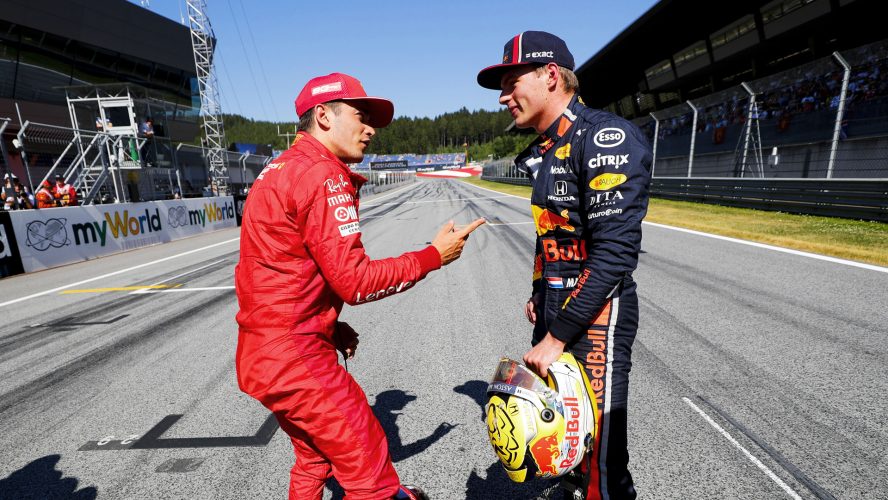 Here's what happened at the Italian Grand Prix at Monza...

The race at the temple of speed was full of thrills. Here are the results of the Italian Grand Prix.

Unfortunately for some viewers at home, the pre-race festivities did not go swimmingly.  Andrea Bocelli took to the microphone for the national anthem but unfortunately there were some audio issues and it was inaudible.

A good start from most drivers saw the grid charge down to turn 1. Unusually, Lando Norris had an incredibly poor start with many of the grid overtaking him down the end of the pit straight.

Norris starting in P3 fell back to P6 extremely quickly. This meant the top three was Leclerc, Russell, and last year’s winner, Ricciardo.

Unsurprisingly, Max Verstappen made up four places on the opening lap and was in P3 starting the second lap.

With that current top 3, all being on the soft compound, it was understandable that they started to streak away.

Pretty soon after Verstappen’s overtake on Ricciardo, he made it stick on Russell down into Turn 1. Verstappen was then in P2 chasing down the race leader Charles Leclerc.

Further back in the race, Carlos Sainz was making up loads of places on the medium tyre. Having started in 18th, Sainz was in P10 by the 7th lap.

The middle stint of the race

Verstappen cooled off on his attacks on race leader Leclerc in an attempt to recharge the battery and save the tyres.

Perez made an early pit stop to change to the hard tyre but came out of the pitlane with visible smoke coming from his front right tyre. It’s presumed that it was a brake overheating. In an attempt to fix this, the Red Bull team appeared to change the brake distribution but it was unsure at this point whether Perez would be able to stay out on track.

On the tenth lap, Carlos Sainz stayed on his charge and made his way up into P7! Carlos Sainz was the man to watch during the early stages of the race.

Sainz pulled off an incredible overtake to get into P5, marginally before the virtual safety car came out after Vettel’s stop on track.

Leclerc decided to make the cheap “ish” pitstop under the VSC and came out in P3, just ahead of Ricciardo. After a poor turn 1 exit it looked like Leclerc could have lost out to Ricciardo but he managed to keep it under control.

A lap later, Gasly fancied his chances on Ricciardo down the straight but suffered a steering lock-up and headed to escape road, giving Ricciardo the place back.

With Leclerc’s early pitstop, reportedly 6 laps earlier than planned, many were wondering whether this was the right decision. Leclerc quickly set the new fastest lap but Red Bull appeared confident they made the right choice staying out with Verstappen.

A feature of the race, right from the first few laps, was a midfield DRS train. From Daniel Ricciardo, down to Guanyu Zhou, there was a DRS train the prevented many from overtaking. Carlos Sainz managed to pick his way through the field due to the Ferrari’s incredible pace. Other than Sainz, however, no one could get through.

A victim of the DRS train, Lando Norris, tried a few moves in the first few laps but had a pretty poor start. Having started in P3, Norris fell back to P7 by lap 20.

Gasly came into the pits at the end of Lap 19 which started a chain reaction of Stroll and Zhou also coming into the pits. Ricciardo and Devries also pitted soon after.

The middle of the race

With all the mid-pack drama, Max Verstappen was building up a nice 10-second gap ahead of Russell.

More of the front runners came into the pits. First came Geroge Russell who had a relatively clean top but left Charles Leclerc in P2, a whole 15 seconds behind Verstappen.

Verstappen then finally came in gifting the lead to Charles. When Max came out, there was over a ten second gap. A few laps later, Max Verstappen got the gap down to just over 8 seconds and was consistently lapping quicker than Leclerc. (That Red Bull- Verstappen combo is scary).

Further back in the pack, Daniel Ricciardo was still holding up Gasly and McLaren asked him to hold him up, even more, to let Lando past when he finally pits.

On Lap 31, Sainz was called into the pitsfor a change to the soft. He came out behind Perez.

Up at the front, Verstappen was eating into Leclerc’s lead incredibly quickly. On lap 32, Alonso retired due to power related issues that looked like they couldn’t be repaired.

This Alpine retirement looked like it would help McLaren massively in there constructors battle.

On lap 33, Charles Leclerc comes into the pits for the soft compound and manages to come out just in front of Russell.

Lewis Hamilton also finally pit on lap 33 which dropped him back to P12 when he finally came out on the new softs.

With less than twenty laps to go, Max Verstappen had a twenty-second lead on Charles Leclerc. The hunt was on.

Lewis Hamilton started to make his way through the field. On Lap 36, Lando Norris was finally called in for some soft tyres. A 5.1 second stop for Norris proved to be painful as it allowed Ricciardo, Gasly, and then Hamilton to overtake him out of the pits.

Hamilton got past Ricciardo and Norris got past Gasly. Norris then got past his teammate. With all this drama, Nyck De Vries was holding onto tenth place and his first Formula 1 point. On debut!

The hunt for first

In the last ten laps of this race, Leclerc was hunting down a very quick Max vertsappen. With ten laps to go, however, the gap was 17 seconds. Despite lapping a lot quicker than Verstappen, it seemed like it wasn’t going to happen for the Tifosi.

During the battle for first, George Russell was managing to hold onto third place with a sizeable gap ahead of Sainz. Although Russell knew he shouldn’t have started on the front row, he’ll be happy with his performance.

The Italian Grand Prix, at this point, seemed to be going the way of Max Verstappen.

During the last few laps, Nyck de Vries on the medium compound seemed to be catching Pierre Gasly in ninth. De Vries was in DRS range of Gasly after escaping the attacks from Guanyu Zhou.

With five laps to go, it was getting pretty boring. However, Daniel Ricciardo “locked the engine” and caused a yellow flag and safety car.

This meant lots of people came into the pits, including race leader Max Verstappen. Charles Leclerc also went in for a pit stop and many others.

Despite the safety car, the pack seemed like it wasn’t bunching up and the race was running out of time to finish properly.

With two laps left to go, the tractor finally got to Ricciardo’s McLaren. Finally, also, the lapped cars could overtake the safety car. Not a nice phrase to hear for all the Mercedes fans out there.

The cars finally bunched and bunched up into two small groups. It got to one lap remaining and it looked like the race would inevitably finish behind the safety car.

The final lap was behind the safety car and meant that De Vries, secured P9 and points on his debut.

The Italian Grand Prix crowd was all audibly booing on the cooldown lap, most likely at the way the end of the race was handled.

The booing got louder when the drivers got out of the car, race control are going to be scrutinised after this. They started booing Verstappen during his interview, which was surprising considering a pretty clean race from him.