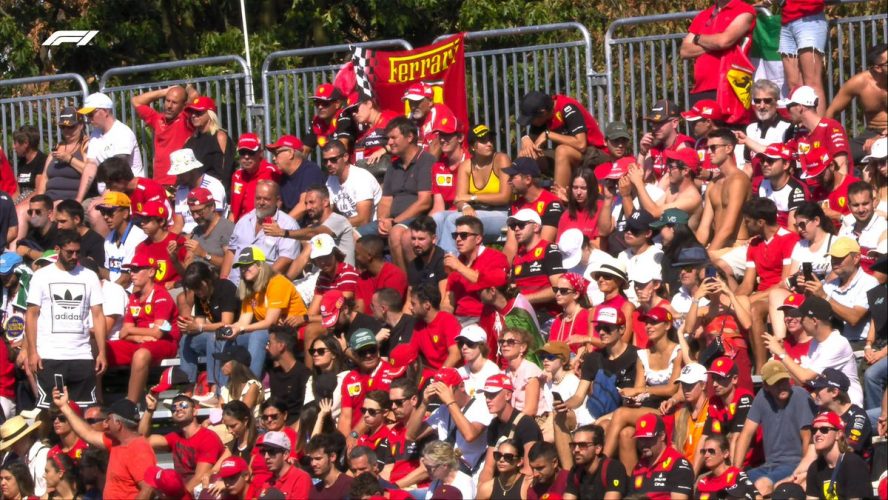 Charles Leclerc will start from pole position in Monza

Charles Leclerc delighted the Tifosi by claiming pole position for tomorrow’s Italian Grand Prix, with Max Verstappen qualifying second but not starting there due to a penalty.

George Russell will start alongside Leclerc on the front row, despite having finished the session sixth.

For once, there were no slipstream games during qualifying at Monza. Perhaps, in part, because the session was fairly redundant for much of the field with almost half of the drivers taking some form of grid penalty.

Esteban Ocon and Verstappen have a five-place penalty, with the other Red Bull of Sergio Pérez taking a 10-place penalty. Valtteri Bottas and the Haases of Mick Schumacher and Kevin Magnussen have a 15-place penalty, whilst Carlos Sainz, Yuki Tsunoda and Lewis Hamilton will head to the back of the grid.

As was the case in Free Practice 3 this morning, Verstappen immediately appeared to have an edge on the Ferraris. His leading time of a 1:20.922 was over three-tenths clear of Leclerc despite coming at the end of a four-lap run.

Focusing at the more important lower section of the timings – at least at this point – late super-sub Nyck de Vries made the early headlines by progressing through to Q2 in his first ever qualifying session.

Appendicitis, surgery and no racing isn’t what I was expecting this weekend!

Negatives:
– Missing out on what looks like a strong weekend for us
– Pain

The Dutchman is replacing Alex Albon at Williams this weekend – the London-born Thai driver suffering with appendicitis – and scraped through in 15th, 0.02 seconds faster than Nicholas Latifi, despite having his fastest time deleted for track limits.

Magnussen also struggled with track limits, having two lap times deleted and falling to 19th. The only driver below him was his teammate who locked up and missed the first chicane on his final attempt.

It has been a tough weekend so far for the under-pressure German, who had suffered with mechanical issues in all three practice sessions.

The other two drivers to miss the cut were the Aston Martins. Lance Stroll finished 18th, one spot behind a very disappointed Sebastian Vettel ahead of his final Italian Grand Prix.

Sainz gave the Tifosi something to cheer in the second part of qualifying.

With both Ferraris and Verstappen running on used tyres, the Spaniard moved to the top of the timings with a 1:20.878, four-tenths faster than the championship leader who had been the only car to run without some form of slipstream.

Leclerc had to take a second stab at his lap after cutting the chicane on his first attempt but moved into second nonetheless.

Tsunoda confirmed his spot at the very back of the grid by not producing a time, whilst Sainz and Hamilton continued into Q3, the Briton beating his teammate’s time despite providing him with a slipstream.

Ocon, Bottas, Zhou Guanyu and De Vries – who locked up and missed the second chicane on his final attempt – were also eliminated.

Surprisingly, it was Leclerc towing along Sainz on the first runs and the Spaniard took advantage, going top with a 1:20.584.

Perhaps the Scuderia’s plan was to make Verstappen start one position lower on the grid by finishing behind Sainz. If so, it looked to be working, with car number 1 only able to produce the third best time, behind both Ferraris.

Onto the final runs, though, it was not Sainz towing Leclerc, but Lando Norris.

Either way, though, it was good enough to see him take his eighth pole of the year, the Monegasque producing a 1:20.161.

Verstappen was 0.145 seconds back but did jump above Sainz, whilst Pérez remained in fourth.

Hamilton again got ahead of teammate Russell, but it is the latter who will start from the row whilst Hamilton will line up 19th.

Norris finished seventh – impressively within a tenth of both Silver Arrows – with Daniel Ricciardo in eighth, so the McLarens will start tomorrow’s grand prix from the second row.