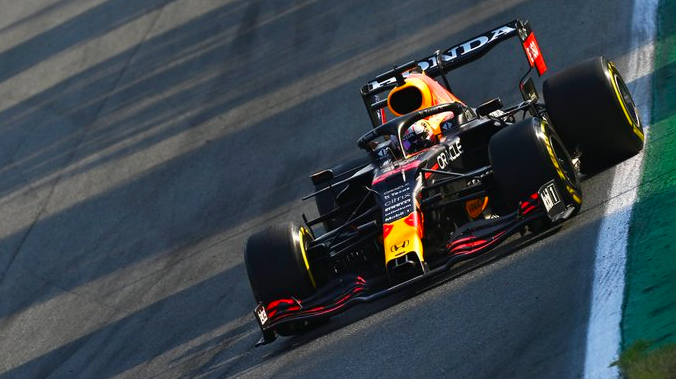 Italian GP Race Preview: Verstappen Is Set To Win After A Dramatic Sprint

We look ahead to magical moments in Monza.

It’s race day! After a dramatic second sprint, Verstappen looks set to take the win at the iconic Italian track.

From lights out, Bottas drove a flawless race but because of a grid penalty, Verstappen claimed pole in Monza.

Mercedes appeared as the front runner finishing fastest and dominating in FP1, Qualifying, and FP2. Bottas outperformed all but will start from the back of the grid since he’s using a new power unit. If Valtteri can drive the way he did on Friday and Saturday, we can expect a prime performance. The Finn has to strive for team points. Hamilton topped all his times during previous sessions. Lewis has to get a good start from P4 though to avoid a frustrating situation. The seven-time champion will fancy closing that five-point gap in the driver standings. The Silver Arrows’ strong car will keep the mindset to maintain the constructor lead.

Red Bull is starting in the perfect position. Verstappen can take advantage out front if he’s able to improve his pace. Max must take off fast in the opening lap. The dynamic Dutchman does have what it takes after his first home victory last weekend. He’ll be looking to keep his lead in the driver standings. Teammate Sergio should fight through the pack for points from P8. Perez has pulled off ten overtakes this season so far. Expect exciting spice from this team.

The McLaren duo set themselves up well. Daniel dared it all. This is the Aussie’s finest achievement since Mexico 2018. Ricciardo will start in P2. Behind him, Lando who held his own will start in P3. Norris nailed it holding off Hamilton. The team is having their best starting position since Brazil 2012. The soft tyre strategy worked out. Bring on that full attack of Papaya fire!

Ferrari is fighting for a solid chance from the third row. Charles can use his maximum potential. Leclerc will start in P5. For the Monégasque, it’s going to be all about tyre management. Carlos caved after a heavy impact crash damaging his SF21. The barriers by the Ascari chicane took over for a brief moment in FP2. Sainz shifted things though and built up his confidence for a P6 start. The Prancing Horse has to put pressure on the four front runners in what looks like a tough home race. They will try to give the Tifosi entertainment.

AlphaTauri will aim for a solid start. Gasly got out safely from his opening lap crash by Curva Grande resulting in a broken front wing during the sprint. Pierre will hope somehow to score points as he’ll start from the pit lane. Unlucky for him. Tsunoda is starting in P15. Yuki is yearning to impress his team after securing a spot for next year. The rookie will have to deliver this time around.

Alfa Romeo is ready in their new tricolore livery. Giovinazzi‘s got his P7 start. What an improvement by Antonio who will be racing for everything to prove himself. As Räikkönen was ruled out, Kubica is taking his place to start in P17. We will miss The Iceman but he’ll be back soon enough. Hopefully, Robert’s rally experience can bring an additional element to the team.

Aston Martin unveiled their 007 badge labelled AMR21 cars catching the attention of the crowd. Also despite a recent €5,000 fine for unfortunate pit lane incidents during qualifying, the team is prepared to step up. Lance Stroll will start in P9. Sebastian is set to start in P11. Alpine is in reset mode as they were also fined €5,000 for committing a pit lane infraction. Fortunately, Fernando Alonso achieved a P10 start and Esteban earned a P12 start. Then Haas hope for something. Mazepin managed a P16 start. Schumacher secured a P18. Both will have to put up a good fight on the track. While Williams will be aiming to score points. Latifi will start in P13. Russell follows in P14 to start the race.

Monza is known for memorable moments. Built in 1922 and part of the inaugural 1950 F1 calendar, the track has held the Italian Grand Prix every year since. The 53 lap circuit with a length of 5.793m and race distance of 306.72km is sure to entertain. The lap record is held at a time of 1:21.046 by Rubens Barrichello in 2004. This record will be broken soon. Cars will experience a full-throttle at 80%, crazy chicanes, two DRS zones and high-speed straights, loved for overtaking opportunities. Can’t wait for that opening lap. See you there at 3pm CEST.