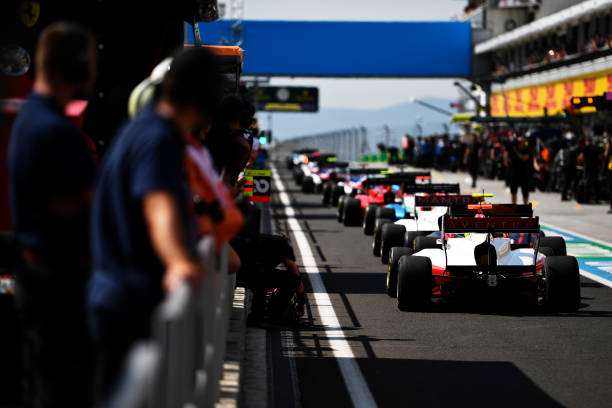 BUDAPEST, HUNGARY - JULY 29: Cars line up in the Pitlane during qualifying ahead of Round 6:Budapest of the Formula 3 Championship at Hungaroring on July 29, 2022 in Budapest, Hungary. (Photo by Rudy Carezzevoli - Formula 1/Formula Motorsport Limited via Getty Images)

Alexander Smolyar takes pole position in Hungary with Zane Maloney lining up beside him after Reece Ushijima had his lap time deleted.

Zane Maloney set the first benchmark time of the session with a 1:33.748 however he was quickly displaced by Caio Collet who set a 1:33.541

Running in the gap proved a popular option as ten drivers remained timeless due to traffic building on the track.

With thirteen minutes to go Trident topped the tables as all the drivers took the podium places.

Arthur Leclerc snatched away the top spot with a 1:32.912 over fourth tenths clear of Johnny Edgar.

This didn’t however last long as MP Motorsport’s Alexander Smolyar topped the times with w 1:32.838.

With eleven minutes to go the field started to peel into the pit for the break.

As nine minutes remain on the clock the drivers took to the track once again with the top three remaining as it was. PREMA leading the pack.

Zak O’Sullivan brings out the red flags with just over three minutes remaining as his Carlin stopped on the main straight.

As it stands Smolyar takes the top spot with a 1:32.740, Bearman in p2 with Leclerc taking the final podium position.

As the lights go green PREMA hold back in the hope to avoid the traffic. This however backfired as the top two PREMA drivers, Bearman and Leclerc failed to cross the line before the chequered flag.

Despite improvements being made all around the track Smolyar keeps his lead.

Championship leader Victor Martins also missed out on the chequered flag leaving him unable to improve his lap time.

VAR’s Reece Ushijima set an incredible lap placing himself on the front row. He was however left disappointed as his lap time was deleted leaving him P19.

No one was able to beat Smolyar allowing him to claim his first pole position of the season.

The top 12 drivers qualified as follows:

With the grid reversed for the Sprint Race, Campos rookie Oliver Goethe will start from pole allowing him to show his potential to the team.