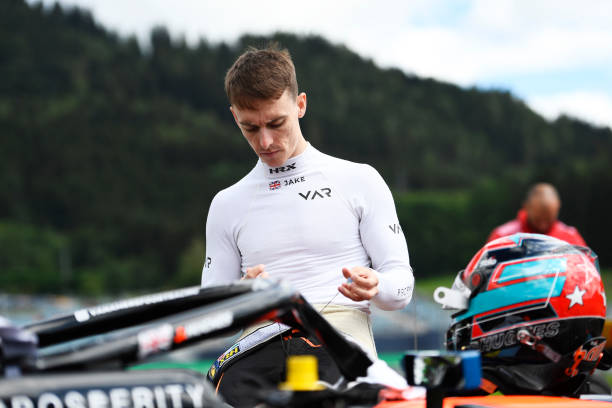 SPIELBERG, AUSTRIA - JULY 08: Jake Hughes of Great Britain and Van Amersfoort Racing (24) prepares to drive during practice ahead of Round 8:Spielberg of the Formula 2 Championship at Red Bull Ring on July 08, 2022 in Spielberg, Austria. (Photo by Rudy Carezzevoli - Formula 1/Formula Motorsport Limited via Getty Images)

Could we see the British driver in Formula E next season?

Van Amersfoort Racing and Jake Hughes have announced that Hughes will no longer be racing in Formula 2.

Hughes has withdrawn as part of his plan to hopefully make the switch to Formula E for 2023. David Beckmann will replace him for the remainder of the season.

Hughes has been out of the #24 car since Round 9 at Le Castellet. He contracted COVID ahead of the weekend in France and missed both that round and the following one in Hungary.

Currently, Hughes sits 16th in the standings, with the same number of points as Clement Novalak in 15th. Hughes scored 10 of his 26 points with a fifth-placed finish in the Feature Race in Austria, his last race.

But now Hughes, former reserve driver for the Mercedes EQ Formula E team, is targeting more involvement in Formula E. Mercedes EQ just completed their final season in the category, so Hughes doesn’t have an announced role anywhere as of now.

Beckmann, who will replace Hughes in Formula 2, was already in his seat for the past two rounds. First, he was just a temporary stand-in, and now he’s a full-time replacement.

The German driver has been racing on and off all season, first filling in for Cem Bolukbasi with Charouz Racing System at Imola. Then, when VAR’s Amaury Cordeel received a race ban, Beckmann filled in for him at Silverstone.

After scoring some impressive results in 2021 but being unable to finance a full-time seat, it’s good to see Beckmann getting more chances to prove his worth in Formula 2.

VAR’s statement said, “Following evaluations made during the summer break, the decision was made to have David Beckmann take the wheel of our #24 FIA F2 car, starting at the upcoming race weekend at Spa-Francorchamps.

“David replaces Jake Hughes, who has indicated to increase his already strong involvement in FIA Formula E. Up to this point, Jake has played an essential role in our maiden FIA F2 season, for which we are grateful. He will always be considered family of our racing team and we wish him all the best on both a personal and professional level!

“German David Beckmann, who acted as Jake’s replacement during a corona-related absence, already proved to be a valuable addition to the team and we look forward to continuing the season with him!”

Hughes also put out a statement on Twitter, saying “Due to my growing commitments and focus on Formula E, I won’t be continuing in Formula 2 with Van Amersfoort this season.

“I’ve enjoyed being a part of such a brilliant team and I wish them, Amaury and David all the very best.

“The next chapter is the one I’m looking forward to.”

With Formula E’s silly season continuing to unfold, it has yet to be seen whether or not Hughes will be racing for 2023. But this announcement makes it seem all the more likely.