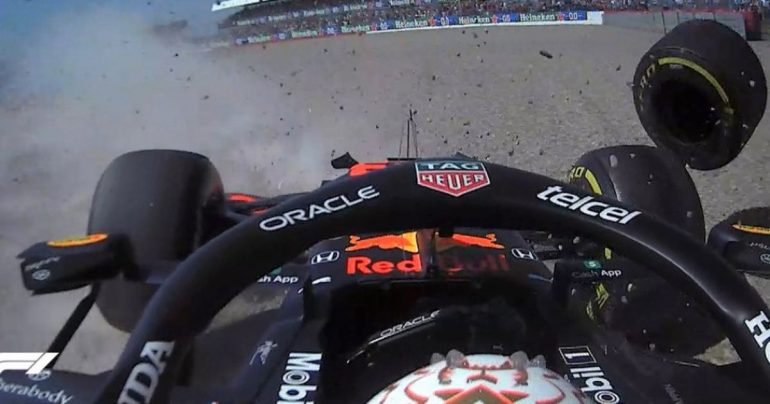 Horner reveals why Max was “knocked out” during 51G Silverstone crash

One of the biggest talking points from the 2021 season has to be the Verstappen/Hamilton collision at Silverstone. Christian Horner has said that his driver lost consciousness in the accident, and has revealed the reason why.

The 51G accident saw a major swing in the title charge and was the first major case where the championship rivals had come to blows in 2021. The incident at Copse Corner saw Max and Lewis clip wheels in such a way that Max flew through the gravel trap and into the tyre barrier, missing a much safer tecpro barrier by a matter of meters.

Audiences watching on TV and in person at the circuit were shocked by what they saw, and many immediately feared for the safety of the driver (and the crowd behind the barrier). Thankfully, Max has no lasting injuries, but Red Bull Racing team principal, Christian Horner, has revealed some more detail from that day…

In F1, whenever a driver has a crash, the team will immediately come on the radio to ask if their driver and friend is ok. When Gianpiero Lambiase (GP, Max’s engineer) checked on his driver, he was met with a stark silence from the other end. A good few moments passed before Max came on the radio, seemingly unable to speak properly he made sounds to show he was ok, but it was clear he was in immense pain.

Radio from after the crash can be found here: watch

Speaking to Channel 4, Horner revealed he thinks that the reason for the silence was that the accident “knocked him out” while it also “broke the seat” going on to say “It was for sure the biggest crash of his career”.

The medical car was quickly on scene and Max was taken to the hospital for precautionary checks. Thankfully he was ok to return to the cockpit the following race.

The actual contact between the Red Bull and the Mercedes was relatively minor, which shows just how dangerous F1 is, and the constant safety improvements are saving lives every week.