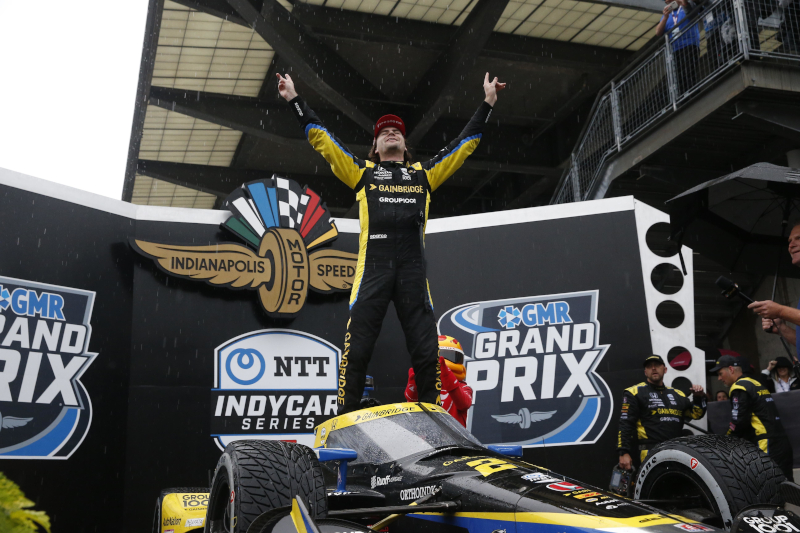 Colton Herta was victorious at a rain-soaked Indianapolis Motor Speedway yesterday, getting his tough season back on track. This was the first wet race in Indycar for three years, and the first real test for the aeroscreeen,  the equivalent of the halo in F1.

Despite taking a pole position already this season, his best previous result was fourth at Miami.  Herta has been vocal in recent months about his desire to reach F1, ideally with McLaren. It was the papaya team that Herta did battle with at Indy.  Herta had to contend with extreme weather conditions, including a massive save after losing the rear of his Andretti.

Starting back in 14th on the grid, Herta had to fight his way to the front, making the inspired choice to pit after just racing laps. When the rest of the grid pitted on lap five, Herta moved to the front of the field.

Running to the maximum two-hour time limit, Herta had to combat worsening weather and multiple full-course cautions. The first occurred on lap 21 when McLaren’s Alex Palou spun and stopped.   Then on lap 16 ex F1 driver Takuma Sato overtook Josef Newgarden, and collided with a battling Harvey and Newgarden.

After the restart on lap 21, caution flags came back out as Rinus Veekay was sent wide, colliding with rookie driver Devlin DeFrancesco. The next caution was caused by Dalton Kennet spinning off.

The incidents left Marcus Ericsson who had pitted early, leading after starting 18th. On lap 41, Herta nearly lost the race after touching wheels with Pato O’Ward while braking into turn one. This sent O’Ward into McLaren teammate Rosenqvist.  After the subsequent caution ended Herta then took the lead from Ericsson on lap 46. Ericsson fell down the order dramatically, while Herta’s searing pace put distance between himself and the rest of the field.

WHAT A SAVE by @ColtonHerta! #INDYCAR

Another caution caused by Jimmie Johnson spinning off wiped out Herta’s lead. The rain fell harder, leading Herta to make the decision to pit for wet tyres. This proved to be the correct choice, as those who stayed out on slicks spun, including second-placed Pato O’Ward. At the restart, Herta pulled away at an alarming pace, until former F1 driver Juan Pablo Montoya spun and retired. This brought out the final caution, with the race finishing behind the safety car.

Herta led 50 of the 75 laps in total, in a display of skill that will further enhance his F1 ambitions.  Speaking to NBC Sports after the race, Herta said:

“That was the hardest race I think I’ve ever done.

The win sets up Herta brilliantly for the Indy 500, with time trials for the iconic event scheduled for 21-22 May.