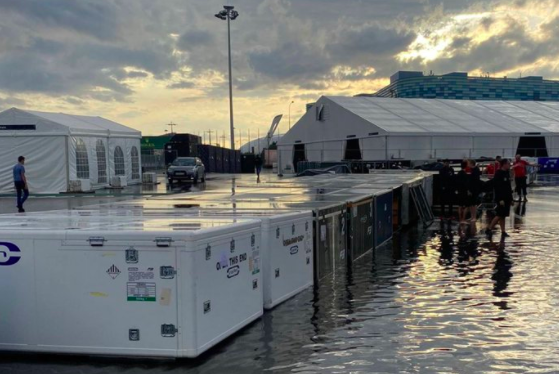 Images emerged from some teams days ahead of the race.

It’s predicted that there will be massive amounts of rainfall for the Russian Grand Prix.

The @SochiAutodrom is currently flooded with just 1 day before the start of the grand prix weekend#RussianGP pic.twitter.com/aNNzkxQAxR

The torrential rain covered the paddock. It was challenging for cars driving on the track. Teams encountered puddle action. The crazy conditions could alter logistics. Team strategies could change. The wet weather could determine whether Red Bull change their engine and take their three-place grid penalty. Perhaps the team’s qualifying performance will help a decision to be made.

At least the sky is pretty even if the paddock is a tad flooded 😬🙄 pic.twitter.com/sLQh94ZL0C

While wet races are most exciting, we’ll see if the forecast changes or remains the same with expected rain for the next few days. The rain will impact the track temperature, visibility, and tyre management. Think about the drivers who are best at that. Yet no one wants another Spa. Are you hoping for rain in Russia?!