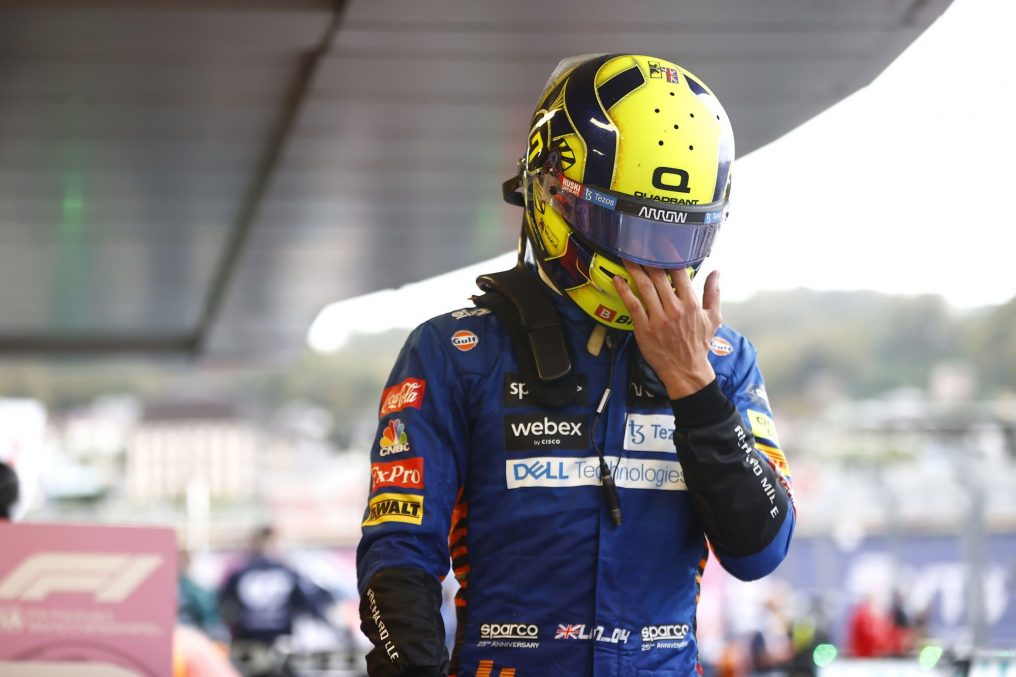 Heartbroken Norris: ‘I thought it was the way to go’

The Russian Grand Prix was set to be a fairytale for Lando Norris as he was two laps away from achieving his maiden win in Formula 1. But as the rain arrived it became a nightmare in a matter of seconds. Stranded on the slicks in the wet, he was able to finish P7 as Hamilton claimed his 100th win in F1.

After claiming his maiden pole in F1 in yesterday’s qualifying, he was able to lead the majority of the race today after only having led one lap in his career prior.

Going long on the medium tyres was a good strategy made by himself and the team and he was able to maximise his pace for the majority of his first stint. He was comfortable and in control of the entire race and really showed what an amazing driver he is.

With only a few laps to go, it was all too good to be true, as the 21-year old was set to keep Hamilton at bay and claim his first win in F1.

The team informed him there was going to be light rain coming across the track and with only a couple of laps to go, he felt he could reach the chequered flag to claim the win on the slick tyres.

Unfortunately, this wasn’t the right call and the rain was much heavier than what the team were expecting.

The rain began to become a lot heavier and saw the Briton struggling on track, sliding off track multiple times and in the end, lost the lead and had to pit for intermediate tyres when it was sadly all too late.

He finished the race in P7 with the fastest lap and driver of the day, but unfortunately, today wasn’t his day, but there is a lot of hope for the future – even with the last few races of the season.

After the race, he was also summoned to the stewards’ office as he missed the pit entry due to lack of grip in the wet conditions but was just awarded a reprimand as they deemed it was not “intentional and predictable” from Norris.

Understandably devasted and heartbroken, Norris spoke with the media about today’s tough outcome.

“I don’t know where to start,” said an emotional Norris. “Obviously unhappy, devastated in a way. I guess we made a call to stay out; we stand by that call but it was the wrong one at the end of the day. I made a decision just as much as the team. In fact, it was more they thought I should box and I decided to stay out. So, my decision – I thought it was the way to go.

“I think I had the confidence beforehand, I knew I was capable of doing it, I’ve felt capable of doing it for a while so I don’t think that’s really changed. Just a bit of heartbreak. I felt like I did everything I could, even when it got tricky at the end. I made a couple of mistakes but still kept Lewis behind and started to pull away a little bit.”

When asked if he could have held off the 7-time World Champion, Lewis Hamilton, had the rain not come he said: “For sure. Everything was under control. I had to do quite a bit of fuel-saving and that’s when he got quite close to me.

“But as soon as I stopped and I could push, then everything was fine. Even the first, like, four or five laps when it started to drizzle, it was tricky but I still had it under control. I made some mistakes but I guess that’s what happens when you’re at least leading out of those two [cars], and if he’s putting pressure on, you can’t just drive slowly and let him past.

“So it was tricky, but what we just, for some reason, didn’t see was how much more rain was suddenly going to come. I didn’t get told that, I didn’t know about that, and I made my decision on… the information that I got before that the drizzle was going to remain a drizzle, not pouring with rain! So I don’t know – it was just all going so well, so I guess it makes it even worse.

“Not the result we wanted in the end,“ Norris concluded. “I could have won the race and I didn’t so I’m never going to be happy like this. But it’s the way it is, the way it went. We made the decisions, I made the decisions that I made and we were obviously wrong at the end of the day, so a tough one.

“But on the positive side I guess I got a couple of points and Daniel [Ricciardo, who finished P4] did a good job as well, so for the team it’s still a decent day.”

This is definitely not going to be the last time we will see Lando Norris fighting for the race win, and his time will soon come for sure. Keep your head up Norris!