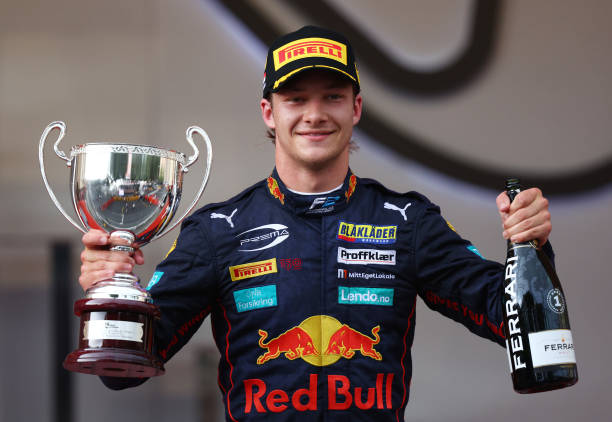 MONTE-CARLO, MONACO - MAY 28: Race winner Dennis Hauger of Norway and Prema Racing (1) celebrates on the podium during the Round 5:Monte Carlo Sprint race of the Formula 2 Championship at Circuit de Monaco on May 28, 2022 in Monte-Carlo, Monaco. (Photo by Clive Rose/Getty Images)

The Red Bull Junior claimed his first Formula 2 victory after an impressive Sprint Race in Monaco but looks to improve in Baku.

After winning the 2021 Formula 3 Championship, Dennis Hauger chose to stay with PREMA for his rookie season in Formula 2.

Hauger has had an unlucky start to the season, including a particularly difficult Sprint Race in Jeddah. However, he soon started turning his luck around, claiming his first points of the season with P6 in the Feature Race. This run continued on to Round Three, in Imola, where the PREMA driver managed to pick up a Sprint Race podium.

After a quiet weekend in Barcelona, Hauger looked to Monaco for a comeback. This was achieved as the Red Bull Junior claimed his first-ever Formula Two victory during the Sprint Race. The PREMA driver finished seventh in the Feature Race despite a strong start around the Principality.

Speaking to Formula 2 after the race he said “I felt like I had a good race, but stuff didn’t go our way.”

Hauger continued on saying “I think we made the maximum of what we could. It’s a shame we got back to the P7 after that Safety Car, but it’s really hard to get by around here.”

Despite these setbacks, Hauger seems hopeful for the remainder of the season but is aware improvements need to be made. He commented on the progress, saying: “We have been looking really good on the pace. In that sense, I’m quite happy with the performance and how we’ve evolved since Barcelona.”

He went on to address what he believes has been the biggest issue so far, saying that “the main problem for us so far this season has been Qualifying, so I’ve got to try to get a step there and in races, we can do stuff on that on that type of track.”

Looking to Round Six

Hopes will be high for Baku after claiming his maiden win on a street circuit. Baku, however, poses a new challenge for Hauger as it’s a new track for the Norwegian driver.

He expressed his thoughts to Formula 2, saying: “I’ve never been to Baku. A new circuit for me again, so it’s going to be interesting to see.

“Obviously, (there’s a) really long straight there and more opportunities there than here (Monaco) that’s for sure. So, it should be fun.”

Formula 2 returns for Round Six in Azerbaijan  (10th-12th June)