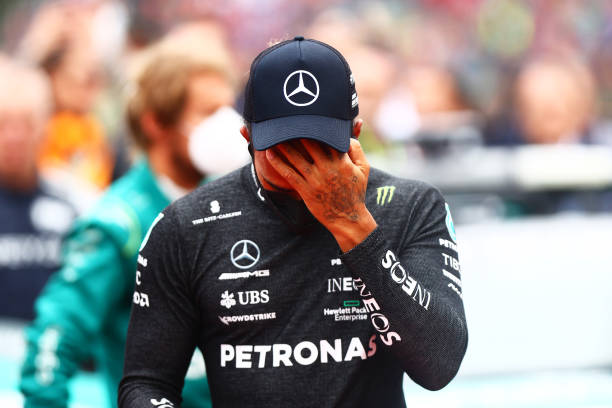 Hamilton’s Future in F1 is Being Questioned

Jacques Villeneuve has expressed his thoughts on Mercedes’ performance this season and Lewis Hamilton’s commitment to Formula One.

Round four of the 2022 season saw mixed results for the Silver Arrows. Fresh-blood George Russell started P11 and went on to finish in P4. He is the only driver to finish in the top five of every race this season.

His teammate Lewis Hamilton, however, has not been as lucky. Hamilton saw a podium in Bahrain, a P10 finish in Jeddah and a P4 finish in Australia. The Emilia-Romagna Grand Prix was the worst race this season for the seven-time world champion.

Hamilton started the race in 14th after both Mercedes struggled in Qualifying and the Sprint Race. Imola is an old-style track that is difficult to overtake on and Hamilton was faced with this difficulty last weekend. Even with DRS enabled, he could not pass Pierre Gasly, who at the same time was trying to overtake Alex Albon.

The final race result saw Hamilton finish P13 due to a five-second time penalty awarded to Esteban Ocon for an unsafe pit-stop release. This is not the result that Hamilton or Mercedes would have wanted. Toto Wolff even apologised over the radio to Hamilton saying that the car was “undrivable” and it shouldn’t be.

Mercedes has been dominant in F1 for the past eight years, winning the Constructors’ Championship consecutively. This year they are currently third in the standings with 77 points. The team’s drivers are currently in P4 (Russell on 49 points) and P7 (Hamilton on 28 points).

Villeneuve reflected on the poor performance of the Brackley outfit in his latest column for formula1.nl. He wrote it is finally time that Mercedes “now in any event need to learn how to lose.” In the past when “someone got closer, they just opened the throttle”. Villeneuve noted that “they don’t have that advantage anymore.”

We saw how Toto Wolff reacted to Sunday, despite Russell’s P4 finish. Villeneuve said that Wolff “has difficulty controlling himself” and his reaction over the radio “spoke volumes”. The Canadian added that there is a “risk of having such a megastar in your team” and Mercedes are now discovering that risk. He continued saying that when Hamilton has a bad race, it generates criticism, but for Russell it “doesn’t”.

Villeneuve understands the dilemma that the Mercedes Team Principal has. He wrote in his column that “It’s not easy being the head of the Mercedes team right now.” Having Russell join the team creates the decision of choosing the “record-breaking champion with the international image” or “the promising talent”.

When commenting on Hamilton’s performance in Imola, Villeneuve said that he “wasn’t in the right rhythm from the off this weekend. He also didn’t look aggressive enough, as if he couldn’t fight. That he ended up getting lapped, can happen. That’s the sum total of all the factors, plus the bad car. He won’t keep having such terrible weekends, and he’ll beat Russell.”

However, the former champion did cast some doubt over whether Hamilton will leave F1. He noted that “you can’t see into someone’s head; you can be down and depressed or you can be unable to deal with no longer winning.” He questioned:

“And will Hamilton still be there in two, three years? Will he even reach the end of this season?”

Villeneuve admitted that F1 has seen in the past some champions leave because they have “just had enough”.

The Brit’s contract keeps him with Mercedes until the end of 2023. He was close to clinching his eighth world title in 2021 and this year he has “come back to fight” for it.

Mercedes have struggled this season with issues such as porpoising, but hopefully they can resolve any problems and we can see the Silver Arrows fight at the front of the pack with Red Bull and Ferrari.