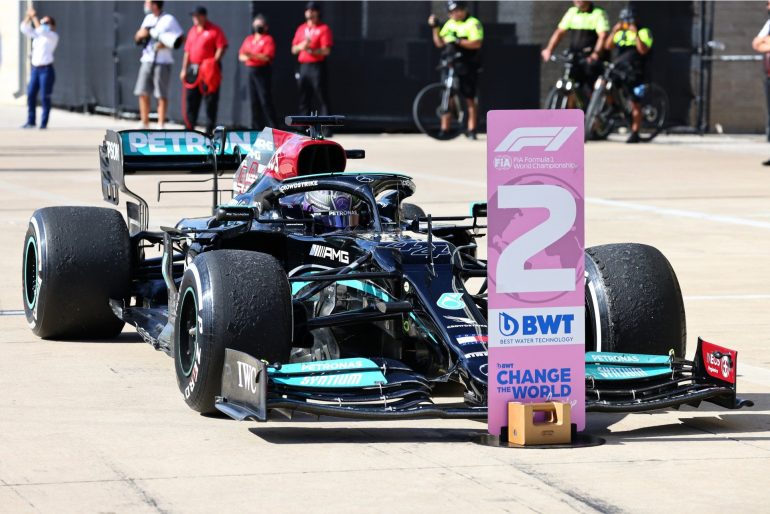 Hamilton: ‘We gave it everything, and they were just quicker’

Lewis Hamilton came tantalisingly close to victory at yesterday’s USA Grand Prix at the Circuit of the Americas (COTA) against his championship rival Max Verstappen right at the end of the race.

After an amazing start, Hamilton was able to get past Verstappen into Turn 1 and maintain the lead before the Dutchman went to pit and performed the undercut on the 7-time World Champion to come out ahead of him with a comfortable lead halfway through the race.

Mercedes’ strategy was to go longer on their set of tyres, in order to have more life in the tyres towards the end of the race to attack Verstappen for the win. Hamilton then had to chase down his rival going a few tenths quicker every lap but unfortunately, the chequered flag came too soon for him and finished only 1.333s behind Verstappen.

He is now 12 points behind Verstappen in the championship with five races to go, as they head to Mexico and Brazil – two tracks that have favoured Red Bull in the past.

Speaking with the media after the race, Hamilton said: “We gave it everything we had, and they were just quicker than us this weekend, for whatever reason. I can’t pinpoint it. It looked like they had just a better rear end, a little bit less sliding than we had.”

The British driver led more laps at COTA than he had in the previous nine races combined. With that strong start on the opening lap, it looked as though the win could be more easily achieved. But Red Bull’s superior pace this weekend was one of the contributing factors to Mercedes’ loss this weekend Hamilton explained.

“Yes, a great start, and the goal was to get in the lead. Finally got a good start – I have not had as good a start in a long time – and I was really happy with it,” said Hamilton, “and it was just about staying clean and coming out ahead and holding onto it. It felt good at the time to get into the lead; I thought: ‘This is step one, and as I said, they were just too quick.”

It was the start of a tense, race-long duel for the win with Max Verstappen!#USGP 🇺🇸 #F1 pic.twitter.com/uCHNU7ANqr

Now looking ahead to Mexico and Brazil – two tracks that have favoured Red Bull in the past – Hamilton has implied that Mercedes may be on the back foot against the Red Bull’s and may find it a challenging couple of races.

“I don’t know what we could have done differently [today],” he said. “I’ll have to sit down and talk with the team afterwards – I think the team did a great job today and it was the best… we had. We go into at least the next two tracks, which are very strong circuits for Red Bull – so that’s going to be tough, for sure.”

With five races to go, can Hamilton claw back the lead in the championship? It is definitely going to go down to the wire!