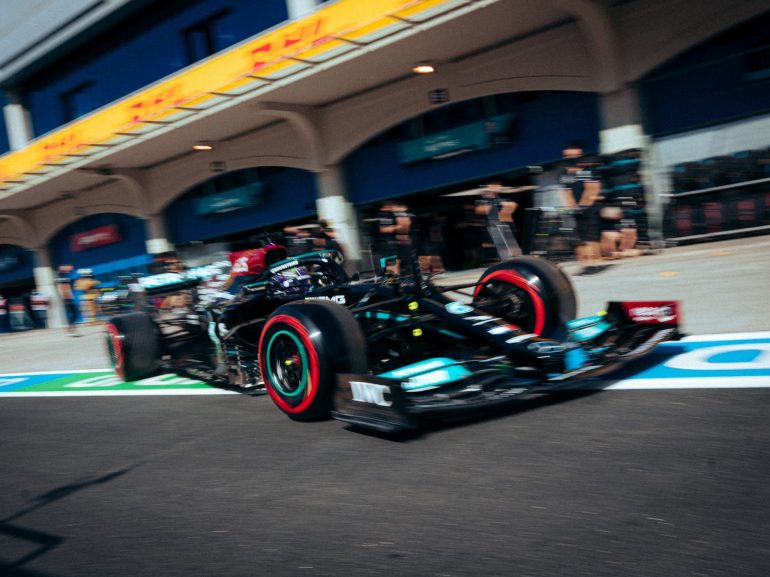 We’re back in Turkey this weekend. After a last-minute addition to the 2020 calendar, Formula One returns to Intercity Istanbul Park. Last year’s slippery tarmac and rainy conditions meant that teams were out early on in FP1 today to collect data for these modern F1 cars.

From early on in the session, driver feedback on the track conditions was positive. “Grip is a lot better than last year” said McLaren driver Lando Norris on the radio. Music in our ears after all the sliding around last year. For comparison: In 2020 the fastest lap at the end of FP 1 was a 1:35.077 set by Max Verstappen. After the first 10 minutes of Free Practise 2021 the fastest lap, again set by Verstappen, was a 1:26.991.

The drivers were up against a stiff breeze from the get-go of the session, which would have affected rear stability through some of these tricky corners, and could lead to some spins when the drivers start to push. The weather conditions this weekend are set to be mixed, with a chance of rain set at about 40% for each day this weekend. Both sessions on Friday should be free of rain, but Saturday’s forecast as it stands calls for rain in the morning, which makes FP 1 and FP 2 even more important for data collection.

Track limits this weekend are looked at closely at Turn 1 exit, Turn 6 exit and Turn 14 exit. A couple of drivers had track times deleted as they test out the limits of track and car during this session. Especially Turn 1 and 14 seems to have caught out some drivers and will be places to to watch for qualifying tomorrow.

Lewis Hamilton looked strong from the get-go, consistently setting the quickest lap time. Of course, Mercedes have now confirmed a new ICE for the Brit this weekend, which will result in a 10-place drop for the starting grid on Sunday. It’s only a 10 place penalty as he is not taking an entirely new Power Unit. Either way, it’ll make this weekend even more interesting, as Hamilton leads the driver championship by only 2 points ahead of Verstappen.

Speaking of the Dutchman: He didn’t seem to happy about the grip throughout the session, blaming it on the tyres rather than the car set up. He finished FP1 in 2nd place, +0.425 off Hamilton. His teammate Sergio Perez once again wasn’t quite able to keep up with the pace, finishing the session in P10. But this is only the first session of the weekend, and car setups can be very different.

Whilst Hamilton looked quite set at the top during the first half of Free Practise, the rest of the field was very mixed throughout the session. Drivers taking turns in setting quick laps close to Hamilton with Alpine, Red Bull, McLaren, Ferrari and Williams all featured in the Top 10 for quite a while. Of course, this is Free Practise, but it’s great to see the midfield so close together this season!

Ferrari used Sainz initial laps to gather some additional data, with some fairly large aero rakes on car no. 55. Sainz has taken on a raft of new PU components for this weekend, including parts that form the crux of their development for the 2022 car, which means he will start at the back of the grid. Both drivers moved up the timing sheets in the last part of the session, with Leclerc finishing P3 and Sainz finishing P5.

McLaren don’t often show their full hand on a Friday, but both drivers were comfortably in the top 10 for a while during this session with Ricciardo and Norris showing great pace on the medium compound tyres. They are definitely a team to watch after two strong weekends in Monza and Sochi, despite Norris not getting the 1st win in Russia.

Both Alpines showed great potential all the way through the session, with Ocon and Alonso finishing P6 and P9 respectively. Ocon topped the lap charts, with 22 laps on his set of hard tyres.

Another interesting info to add perhaps: Five drivers were wearing new prototype gloves, which are an evolution to improve safety, especially when it comes to heat exposure. This is part of the FIA’s measures to improve driver gear following Romain Grosjean’s Bahrain incident last year.

The full classification below:

Let’s reset and see what FP2 later today will bring!