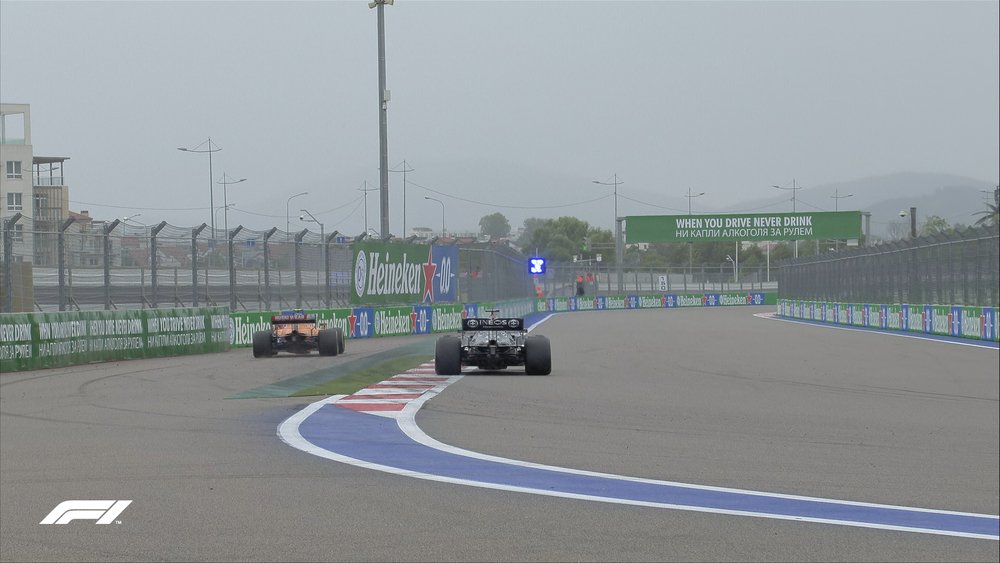 Hamilton lost out at the start, but a long first stint brought him back into play late on, and his Mercedes team opted for the right tyre choice when rain fell late on in the race.

Norris lost out on the start to Carlos Sainz at the start, further back Lance Stroll had a superb start to get up to fourth behind Williams’ George Russell.

Hamilton struggled off the line and lost a place to the other McLaren of Daniel Ricciardo and Stroll, where he found himself stuck behind until the pitstop phase, all while title rival Max Verstappen was carving his way through the field, even passing Hamilton’s teammate Valtteri Bottas who also started near the back due to an engine penalty.

On lap 14, Norris managed to retake the lead from Sainz at Turn 14 and managed to break away from the Ferrari while behind, Stroll pit early and undercut George Russell to take third.

Norris, Ricciardo and Hamilton all went much longer on their opening stints, but the Australian lost out to Hamilton due to a slow stop yet did manage to get ahead of Lance Stroll on lap 32.

It set up an enthralling finale between the two British drivers, with Hamilton hunting down Norris, the pair trading fastest laps.

The Mercedes managed to close the gap to just over a second, but couldn’t get any closer to the McLaren – and then the rain came with just eight laps remaining.

Hamilton chose to box for intermediates but Norris opted to remain on slicks, leaving the seven-time world champion a 25-second gap deficit to make up as the rain came down heavier – but it was the right choice.

Norris was sliding all over the place and eventually spun, conceding to another pitstop for intermediate tyres, dropping him down to seventh.

Verstappen – who started from the back of the grid – took an excellent second place to reduce the points loss to Hamilton.

Ricciardo was fourth, followed by Bottas and Fernando Alonso.

Norris was seventh and might pick up a time penalty for improper entry into the pitlane in the closing stages.

Elation for Hamilton, heartbreak for Norris

Hamilton and Norris provided excellent entertainment at a track where the races have often been a rather dull affair.

Norris was superb throughout, and despite initially losing out on the start to former teammate Sainz, he quickly repassed the Ferrari – and looked in control from then on.

Hamilton’s had a difficult start to the race and was jumped by Ricciardo and Stroll, and found himself stuck behind the Australian until McLaren had a slow stop.

The Mercedes driver would then go on to clear Sainz and close in on race leader Norris at a rapid pace.

But when Hamilton got close to the back of his younger compatriot, he couldn’t find a way past and it looked likely that McLaren would take their second consecutive victory – until the rain fell.

Mercedes took the gamble and pit Hamilton for intermediate, while Norris committed to slicks, but it was the wrong call.

The rain quickly began to get heavier and Norris had no grip, sliding off track and allowing Hamilton to pass.

Norris would eventually end up seventh after eventually changing tyres, and may still receive a penalty for crossing the pit entry line.

If Verstappen was told on Sunday morning he would finish the race in second, he would have bitten your hand off.

The Dutchman made a lightning start up the field, and went long on the hard tyres on his opening stint, jumping the likes of Russell and Stroll – even managing to get close to Hamilton as the Brit struggled behind Ricciardo.

Verstappen was sixth in the closing stages when the rain began to fall and he also gambled on the intermediate tyres, climbing up to second and benefiting from Norris’ pain.

The result means Hamilton retakes the championship lead from Verstappen and leads by just two points heading into the Turkish Grand Prix.