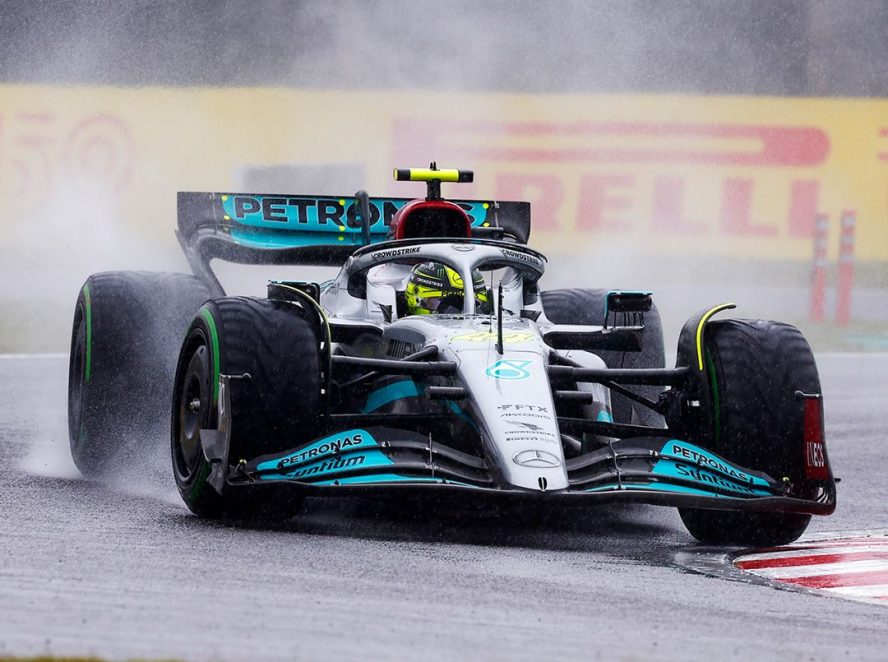 Hamilton: Mercedes “quick through the corners,” can still spring surprise in Suzuka

Early in the weekend, the Silver Arrows showed signs that they could be back on the pace amid what has been a difficult 2022 campaign, with George Russell and Hamilton achieving a 1-2 during a wet Free Practice 2 at the Suzuka Circuit.

Yet, as the track dried up in Japanese Grand Prix qualifying, Mercedes’ pace deficit to Red Bull and Ferrari began to resurface.

Predominantly seen on Suzuka’s straights, this speed deficiency meant Hamilton and Russell were only able to set laps fast enough for sixth and eighth, 0.957 and 1.085 seconds off polesitter Max Verstappen respectively.

However, while acknowledging Red Bull’s advantage down the straights, Hamilton has said that his car is “feeling really good” ahead of the race, and suggested that weather conditions could bring Mercedes back into contention.

“It’s not going to be great with our car and no DRS,” said Hamilton.

“I think Red Bull is still quicker with no DRS on the straight than us when we have DRS open. But we’ll be quick through the corners.

“The rain always opens up more opportunity. I think it could be not the most exciting race if it’s dry. At least not for us, overtaking.”

Hamilton’s teammate, who struggled to a last-placed finish at last week’s Singapore Grand Prix, says the team may have left themselves vulnerable with car setup.

To cope with Suzuka’s tight, twisty first sector and its high-speed chicane into the final corners, Mercedes have opted for a high-downforce configuration.

As a result, Russell says Mercedes found themselves losing huge chunks of time on the straights in qualifying, meaning that they “didn’t expect to fight for pole,” but ended up further behind Red Bull and Ferrari than anticipated.

“We’ve known this year we’ve not had the most efficient car, very draggy, and this is the first high-downforce circuit where you have long straights as well,” Russell explained.

“I think we’re probably losing seven or eight tenths to Red Bull in the straights today, and the circuit has exposed that weakness of ours.”

Mercedes technical director Mike Elliott added that simulations had suggested qualifying would go better than it did, but the team “weren’t expecting it to be a really good circuit” for their car.

“We expected it to be a bit more challenging,” said Elliot. “Where we want to run the car optimally in downforce level appears different to where others want to run, and that’s part of the way we’ve developed the car and part of what we need to adjust over the winter.”

Can anyone spoil Red Bull’s party?

Heading into the weekend, Verstappen said it’d be “extra special” to win his second world championship in Japan given that his car is powered by a Honda engine. But can Ferrari or Mercedes spoil the Red Bull team’s title party on Sunday?

In qualifying, Ferrari pair Charles Leclerc and Carlos Sainz were both less than a tenth off the Dutchman, suggesting that they could compete with him for the win during the race.

As pointed out by Hamilton, rain could also disrupt Verstappen’s bid to secure the title. The 25-year-old finished a lowly seventh in tricky conditions in Singapore, and wet weather in Formula 1 has a habit of somewhat levelling the playing field.

To guarantee winning the championship this weekend, Verstappen needs to win the race and get the point for setting the fastest lap, but his 104-point lead means he only has to finish in the top six to have a chance of claiming it anyway.

Either way, the reigning world champion won’t have to wait long to find out, with the Japanese Grand Prix set to begin on October 9, 2022 at 6am (BST).