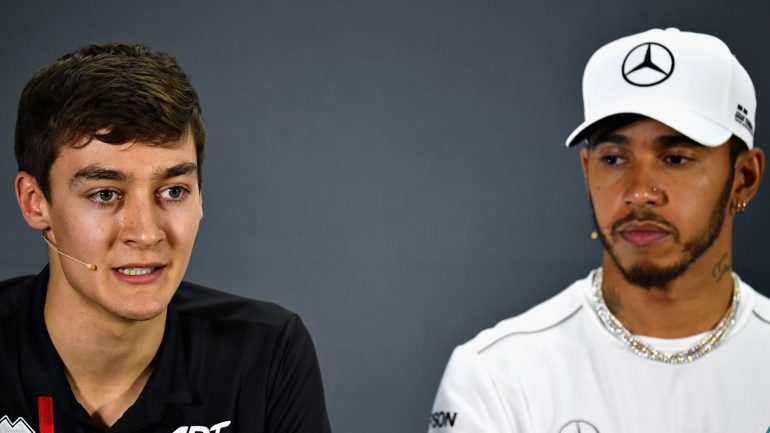 Seven-time World Champion Lewis Hamilton has openly stated that he no longer wants to be the Mercedes guinea pig and hopes his teammate George Russell can take over the role of testing experimental setups on race weekends.

Although Hamilton was despondent heading into Sunday’s race, claiming the W-13 was  “undrivable” and “only getting worse”, the Brit battled his way to third place on race day in Montreal to take home his second podium of the season.

Speaking after the race, the Silver Arrows star revealed his concerns about going overboard with experimental race set-ups as well as his hopes that Russell takes on more responsibility in terms of risking his weekend for the team.

“Maybe in the second half of the season George can do the experiments,” Hamilton said.

“Yeah, I think moving forward, I think we’ll be a little bit more cautious on doing too many experiments as it really does hinder you through the weekend, especially if you only have practice one and two in the dry and don’t get a FP3, for example.

“So yeah, I think there’s lots of learnings from this weekend, and improvements that we can make moving forwards.

“But you know, really great pace today. And it’s so nice to see, it’s not always been the case I’ve had with this car so it’s nice to have a bit of a good battle with her today, her or him, whatever you call a car.”

Hamilton also hopes that he’ll be able to put on a show at his home race in Silverstone in two weeks.

“I really hope, moving to Silverstone… it’s such an important race for us and for me and so I really hope that… I just want to be in a battle with these guys.

“At the end there when the Safety Car came in and we started again, I was hoping that I could just… the dream was like if I can keep in that battle with them and find a way but they were rapid. But we will get there eventually.”

Despite wildly underachieving their expectations, Mercedes have held together well under Toto Wolff who has helped keep them at the front of the battle of the midfield. By keeping themselves close to the top two, George Russell’s consistency and a confident Lewis Hamilton could see the Silver Arrows pounce on any opportunity thrown their way.