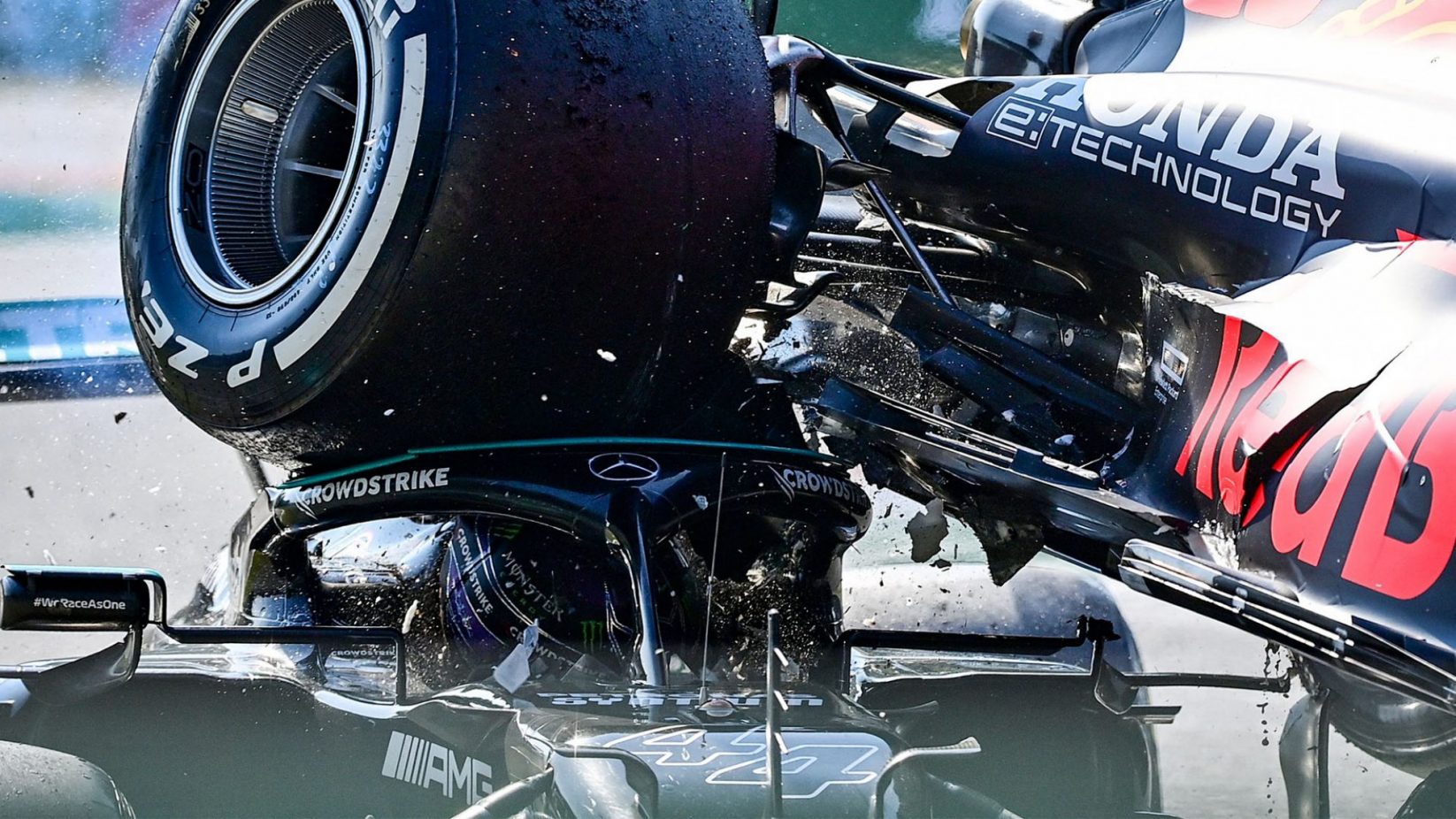 Hamilton: ‘Halo saved me’ after incident with Verstappen

After his dramatic crash with Championship rival Max Verstappen, Lewis Hamilton has said that the halo saved him and kept him safe during the incident following the Italian Grand Prix in Monza.

The incident took place just after Hamilton had emerged from the pit lane on lap 26 of the race. With Verstappen having a slow stop, it put him out in the race in ninth – a position that was not needed for Red Bull and Verstappen in their fight for the Championship. Hamilton re-emerged from the pit lane with Lando Norris and Verstappen charging down the pit straight, with McLaren’s Norris able to get past Hamilton, leaving the championship contenders in a fierce battle coming into Turn 1.

Hamilton took the inside line going into the Variante del Rettifilo chicane with Verstappen on the outside going wheel-to-wheel into Turns 1 and 2. This close contact lead the pair to collide and with Verstappen hitting the sausage curb, suspended him into the air and land on top of Hamilton’s car. The Red Bull’s rear right tyre landed on top of Hamilton’s halo and also made contact with his helmet.

Speaking to the media after the race, Hamilton showed his praise for the halo that saved him from worse injuries.

“Honestly, I feel very fortunate today,” said Hamilton. “Thank God for the halo, that ultimately, I think, saved me, and saved my neck… I don’t think I’ve ever been hit on the head by a car before and it’s quite a shock for me because I don’t know if you’ve seen the image but my head really is quite far forward. And I’ve been racing a long, long time, so I’m so, so grateful that I’m still here.

“I think Angela [Cullen, Hamilton’s personal physiotherapist] is going to be travelling with me these next few days, but I probably will need to see a specialist, just to make sure it’s good for the next race because it’s getting tighter and tighter… It definitely feels like it’s getting a little bit worse, as the adrenaline is [wearing] off, but I’ll work with Ang to fix it… I’ll live!”

Lewis and Max on *that* collision 🗣🗣 #ItalianGP 🇮🇹 #F1 pic.twitter.com/Pc6Gh0H5BH

After both drivers spoke with the stewards after the race, they deemed Verstappen to be “predominately to blame” for the crash and was handed a three-place grid drop and two penalty points that will be taken at the next Grand Prix in Russia.

In response to the ruling, Hamilton said: “I think I’m ultimately proud of stewards, I need some time to really reflect on it, but I think it definitely sets a precedent, and I think it’s important for us moving forwards, for the safety of the drivers, that there are strict rules in place.

“We are sandbagging” says Bottas

“So in all instances, I’ve moved out of the way to avoid incidents and gone over the kerbs. Today, I was ahead in Turn 1, I left enough room, like a car width on the outside going into the corner, but we barrelled at a similar sort of speed into the corner and I was ahead going into 2. And ultimately, he lost control going over the kerb and went into me. So I don’t feel at fault, because I got hit from behind.

“Ultimately, there’s a point at which you have to concede you’re not going to make the corner and you have to go across [the run-off],” he concluded. “Everyone generally has gone across those kerbs, and I’m not sure why Max didn’t today.”

In Verstappen’s interviews after the race, he felt that he was squeezed out of track position and not left enough space by Hamilton.

After both drivers were unable to score points in yesterday’s Grand Prix, Verstappen currently continues to lead the Drivers’ Championship by five points with eight rounds still to go this year.