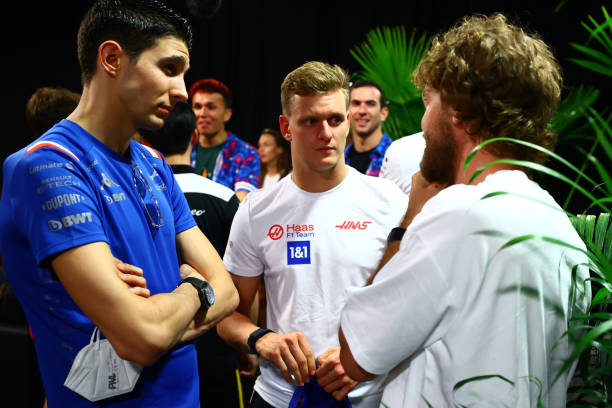 MIAMI GARDENS, FLORIDA - MAY 04: Sebastian Vettel of Germany and Aston Martin F1 Team, Mick Schumacher of Germany and Haas F1 and Esteban Ocon of France and Alpine F1 talk back stage ahead of the F1 Grand Prix of Miami Opening Party at Hard Rock Stadium on May 04, 2022 in Miami Gardens, Florida.

Haas or Alpine? Schumacher a ‘candidate’ for Alonso seat

With Haas extension rumours floating about, who should Schumacher sign with?

Formula 1 driver Mick Schumacher is facing a tough decision to make regarding his future in F1. If you thought the huge shakeup of the 2023 grid was over, think again.

With Sebastian Vettel announcing his retirement, Alonso moving to Aston Martin and Oscar Piastri denying driving for Alpine in 2023, the door has opened for Mick Schumacher to snap up the seat on the French team. That is what former F1 driver and Schumacher’s uncle, Ralf Schumacher believes.

“Mick has not yet signed a contract,” Ralf told Sky Germany when asked about his nephew’s short-term future with Haas.

“Therefore, he would be a candidate.

“A candidate with speed as we have seen. Nico Hulkenberg is also still in the starting blocks. Then, there is the question of Daniel Ricciardo.”

Schumacher endured a point-less first season to start his career in F1 with Haas. However, since 2022, the son of the seven-time World Champion has given his experienced teammate Kevin Magnussen a good run for his money. Schumacher bagged his best ever finish at the Red Bull Ring, scoring eight points after beating out Lando Norris for sixth place.

Since his purple patch of successive point finishes in the UK and Austria, talks have surrounded the German regarding a contract extension with Haas F1 team.

Haas’ team principal opened up about his driver and what initiated the turn-around. When quizzed if he has seen a change in Schumacher since he broke his scoring duck, Steiner told GPFans: “No, I would say it started in Canada.”

“He was, in my opinion, a bit more chilled out, even if he didn’t score points there. I don’t know why that happened. I have no idea. Don’t ask me why.

“I just felt like he was a little bit more relaxed and then the race after the points came. Maybe it’s got to do with that one. It’s difficult to say with these guys, they have been racing for so long, they’ve got poker faces [masking] what they play and what they think.”

Although Haas team principal Günther Steiner revealed that he was happy that Schumacher has started to contribute to the team, the Italian stated that in order for there to be a new deal, the 23-year-old needs to

Does Ferrari have a say?

As Schumacher is still part of the Ferrari driver academy, there was speculation that Haas would have to wait until Ferrari give the green light in order for Haas to extend with the young German.

“No, we don’t have to wait to see what Ferrari says,” Steiner told RACER.

“We never decide the driver before the summer break and we will not do so this year.

“Obviously I will start to speak with Gene over the summer break and then you know how we do it — you will ask again at the next race in Europe and then we will tell you sometime in the end of September or October what we are doing, and the same will be happening this year hopefully.”