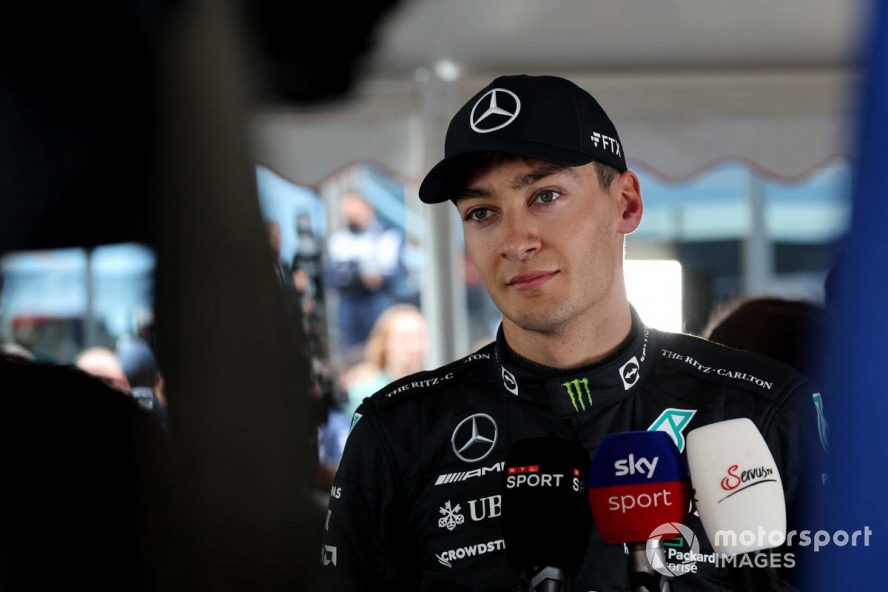 George Russell has said he is “not a major fan” of sprint races under their current format and suggested a way of improving them in the future.

Whilst the Mercedes driver had an excellent Sunday at Imola, moving up seven places and holding off a charging Valtteri Bottas to finish fourth, he could only move from 12th to 11th during the sprint on Saturday.

The Emilia Romagna Grand Prix weekend featured the first of three sprint races this season, with more planned for next year.

Russell was one of many drivers trapped in a DRS train for much of the reduced rade distance, eventually passing Sebastian Vettel for 11th after 19 of the 21 laps.

Sprint races – which run to one-third of the grand prix distance – have divided opinion amongst fans and drivers since their introduction last year, with many feeling tweaks need to be made.

Russell is one of those and has suggested a way to improve the format.

“I’m not a major fan of it, in all honesty,” the 24-year-old said, when asked about the sprint format.

“It needs to probably be 50% longer, or just that little bit longer to see the tyres degrading.

“The drivers maybe need to manage the tyres a bit more, and then you can see a bit more of a difference between cars.

“At the moment, everyone is just going flat out, and there’s not a big enough lap time difference to see those overtakes, unless you qualify out of position like you saw with some cars.”

The point of the sprints, however, was to see the drivers push flat out and not worry about strategy. Of course, in addition to producing more revenue for the sport with a competitive event on every day of the weekend.

It appears the current format has produced a catch-22, though, with a lack of strategy variation seeing most drivers stuck in a queue.

And Haas driver Kevin Magnussen has a different gripe with the sprint weekends, which currently include a redundant FP2 session on Saturday morning where the teams are not allowed to make any changes to the cars.

“There could be some tweaks, and I don’t know if I agree with the parc ferme between FP1 and qualifying.

“You can’t work on the car anymore and that is a little tougher for the smaller teams.”

The Dane went on to say that making the sprints standalone races that did not influence the grid for Sunday could make drivers “fight a little harder and take more risk”.