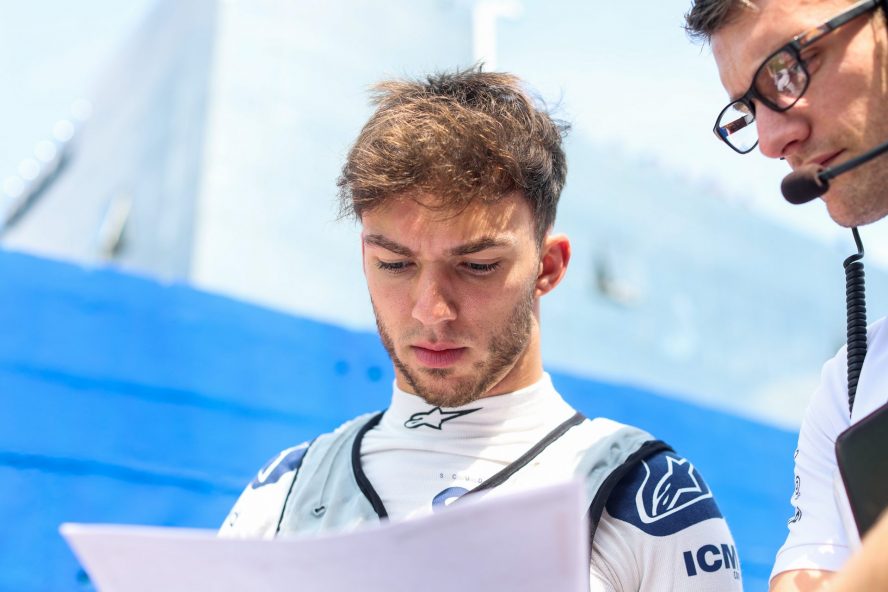 Gasly reveals cause of AlphaTauri’s poor showing at Sao Paulo

AlphaTauri and Gasly struggled at Interlagos, and need a good result at the final round in Abu Dhabi to cement P8 in the constructor's championship

Pierre Gasly has revealed the cause of his and AlphaTauri’s lack of pace at Sao Paulo. Both cars suffered a poor race, finishing outside the points at a critical point in the season.

Gasly’s race in Sao Paulo began with promise after lining up P10 on the grid. However, his pace evaporated after his first pit stop, a switch from soft to medium tyres proving to be a hindrance.  Unable to recover his earlier pace, Gasly slipped down the order. A five-second penalty for speeding in the pitlane compounded his miserable afternoon, dropping the Frenchman to P14 from P12.

Summarising his afternoon, Gasly speaking to formula1.com said that he had pace at the start of the race, admitting he “struggled” on the mediums. He then revealed that he  believes that AlphaTauri’s competitors are now more competitive:

“I was really happy with the start, I managed to get to P9. On the soft, I must say, we were kind of competitive, but then on the medium tyre we struggled.

“Ultimately, at the end, we were just too slow. We’re not competitive enough compared to the cars around us. It didn’t really matter what strategy we would do.

“Inside the cockpit I tried everything I could, I fought as hard as I could, especially in the end. We had some good battles, but we were not competitive enough for the top 10 here.”

On AlphaTauri’s pace struggles, the Japanese driver said the team could take away “a couple of positives”,  but issues remain as F1 prepares for its final race of the season: “Normally you can go through, you can pass the Safety Car, but I got told that you have to stay in the line. The Safety Car was lighting up the green light, which means the lapped cars can go passed the Safety Car. Somehow I couldn’t”.

“The pace is… there were still a couple of positives, but still there’s a bit of tricky things going on, so definitely we have to investigate until Abu Dhabi.”

In a telling statement, Gasly stated scoring points is “extremely hard” for both him and Tsunoda. Just two points separate AlphaTauri and Haas in the race for P8 in the constructor’s championship. Gasly also highlighted the race will be his final outing before his move to Alpine for 2023. The Frenchman says it will be “emotional” and is targeting a strong finish:  “For both of us it’s extremely hard to score points. We tried, that’s the most important [thing], and now we’ve got one last chance in Abu Dhabi. It’s my last race with the team, so it’s going to be an emotional one, and hopefully we can get something out of it.”