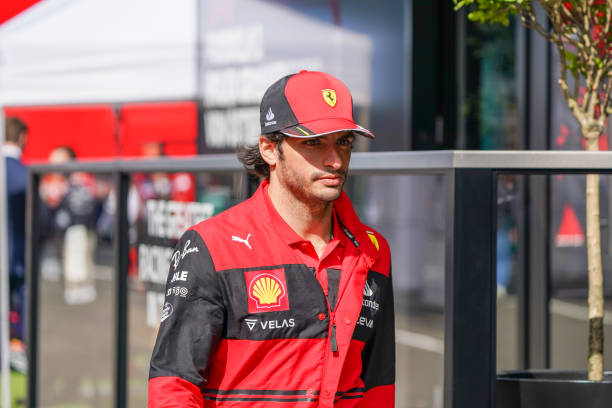 It's a double practice session lead for Ferrari in France

FP2 at Paul Ricard saw Carlos Sainz dominate as he topped the timesheets with a 1:32.527.

Heading into the weekend, all eyes were on the top three teams. Ferrari, despite some reliability issues, have won the previous two races. Red Bull are still leading both championships, with Max Verstappen 38 points ahead of Leclerc. Behind them are Mercedes, who have improved substantially in recent races having brought new upgrades.

In FP1, Ferrari continued to be strong as Leclerc went quickest, with Sainz in third, sandwiching Verstappen in between the two. For Mercedes, George Russell went out on track, but Lewis Hamilton was in the garage as Nyck De Vries drove the W13.

What happened in FP2?

Beginning of the session

Scuderia Ferrari announced earlier that Sainz would be taking a 10-place grid penalty for Sunday’s Grand Prix. At the beginning of the session today, the team were seen putting in a new floor of Car 55.

After the first 10 minutes, the top three saw both Alpine’s 1-2 with Fernando Alonso leading his teammate. Mick Schumacher, who has had some great results recently, set a lap for P3.

The three drivers were all on the medium-compound tyres, with only Nicholas Latifi, Daniel Ricciardo and Lance Stroll driving on the hard-compound. However, a nasty spin by Schumacher saw him drop down the grid.

When Leclerc and Sergio Perez left the garages, the Monegasque completed a 1:34.182 going fastest. Verstappen came out not long after, with his flying lap being followed on Sky Sports.

The Dutchman avoided the bump at Turn 5, which is a crucial aspect of the track this weekend. His lap saw him complete purple sectors in all but Sector 3, which helped him put his car ahead of Leclerc.

Once the floor had been fitted in his car, Sainz left the pits. His first flying lap saw him go eight-tenths faster than Verstappen with a 1:33.322. But the Spaniard was on the soft-compound tyres.

Whilst both Ferraris and Verstappen were topping the timesheets, Perez wasn’t having as great a session. With 14 minutes to go, the Mexican was in P10. Red Bull had brought upgrades this weekend, and he had previously said that he didn’t feel as comfortable with the car as earlier in the season.

This weekend Ferrari definitely seem to have stolen the march from Red Bull.

Mercedes have brought more upgrades this weekend. According to Ted Kravitz on Sky Sport F1’s broadcast, the main upgrade involves having a “reduced local floor load by reducing the local camber.” This in turn means the diffuser is working harder, providing more downforce.

As the session was nearing its end, both Russell and Hamilton were in fourth and fifth respectively. The two were having a strong session, currently proving Horner’s expectation of the Silver Arrows being strong at Paul Ricard. But they’re not quite up to the pace of Red Bull and Ferrari quite yet.

Both McLaren drivers finished inside the top 10 in FP2. Lando Norris sat behind Hamilton in P6, whilst Daniel Ricciardo just got peaked above Perez for P9.

Gasly continued his good runs from FP1 into this afternoon. On the medium tyres, he finished behind Norris, 1.3 seconds behind Sainz in P1. The upgrades for AlphaTauri definitely seem to be working for the Frenchman, but his teammate is further down the field outside the top 10.

It was a mixed session for Alpine at their home circuit. Alonso was running in 11th, but Esteban Ocon was down in P18.

However, there is no particular reason for Ocon’s slower pace. It is just a matter of Ocon feeling comfortable with the car and knowing how to push it to hopefully have a good result at his home race.

Last time out in Austria, track limits were the talk of the weekend. There were over 40 track limit offenses, which saw several penalties awarded to drivers.

Christian Horner anticipated that Paul Ricard would be worse for track limits. He said it was due to the nature of the circuit with the tarmac run-off.

On one of his fast laps, Lando Norris was seen going wide at the exit of Turn 6. David Croft from Sky Sports also noted that Sainz ran wide and exceeded track limits on one of his laps as well.