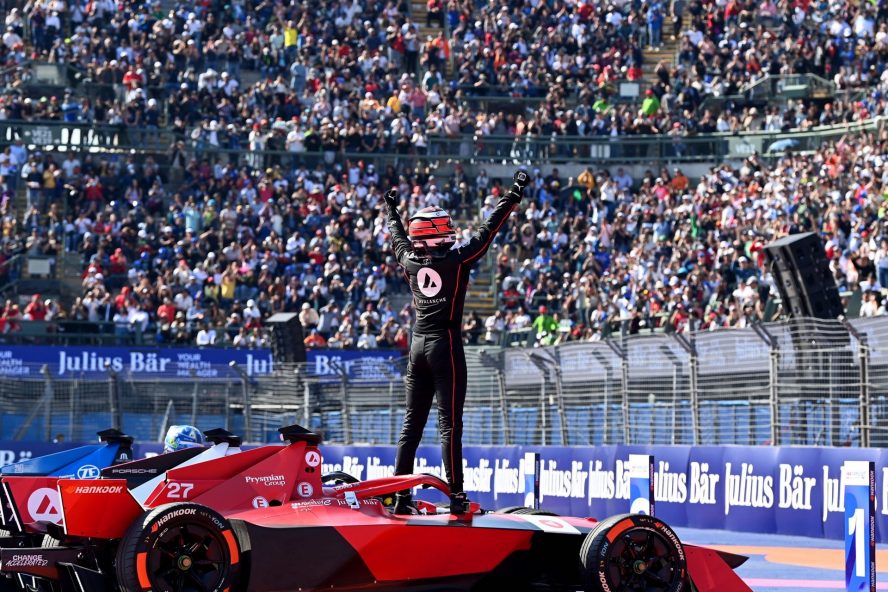 Jake Dennis won the historic Mexico City E-Prix in the first race of the season with the new Gen3 cars.

Avalanche Andretti’s Jake Dennis brought home the first win of the season and the Gen3 era.

Season 9 of Formula E has officially began with a fiery and entertaining opening race in Mexico City – kicking the campaign off in style. Below is the roundup from every talking point of the race and a full race report can be found here.

A day to remember for Jake Dennis

The world’s premier all-electric racing series delivered another classic at the iconic Autódromo Hermanos Rodríguez circuit. But it was the Brits who shone in the Mexican sunshine. It is a great start for Jake Dennis and Andretti who are no doubt starting the season as they mean to go on.

The race saw the debut of the GEN3 car, the world’s most sustainable racing car, as a 40,000-capacity crowd got a glimpse into the future of electric automobility. But Dennis remained unphased by the change and charged to victory. The new car did however bring some new challenges as he said:

“It was such a physical race. These cars are so hard to drive physically and with the lower grip as well, it makes everything more challenging. But it’s even more rewarding, especially when you win by five seconds.”

The Englishman started the race second after a mistake in qualifying paved the way for Lucas Di Grassi to take pole. However, he believes that it was teamwork that guided him to an historic victory in Mexico. He said:

“It didn’t look like it was happening in qualifying, we turned it round, made some small adjustments for the race and absolutely nailed it. Big kudos to my guys.”

The first victory of the season has inevitably been closely watched by fans and there was no shortage of excitement at the track on Saturday. In a post-race interview, Dennis stated:

“The fans here have been sensational.”

He followed up with:

“In that final lap I could really hear them cheering.”

Formula E welcomed one of motorsport’s most iconic names in Mexico City as McLaren made its debut in the biggest all electric Championship. The legendary team wasted no time getting started in the sport with Jake Hughes’ fifth place finish starting the season off with a bang.

He began the race in P3 after a scintillating qualifying session, but the experience of the veteran drivers, Pascal Wehrlein and Andre Lotterer proved to be too much for the rookie driver.

With McLaren’s CEO, Zak Brown watching from the team’s garage, McLaren made a good impression on their new series, and they will be looking forward to Saudi Arabia’s Driyah E-Prix.

Ian James, McLaren team boss, said before of the season start that he expected an adjustment period for the team but based on this performance, there would be few who would bet against McLaren becoming a dominant force in the electric racing world – just have they have done across the world of motorsport.

Many people were expecting big things from DS Penske and Jaguar TCS Racing this weekend, with the former having a stacked line-up of two world champions – who have 30 race wins between them. However, the race did not go as expected for either team.

For DS Penske, only one point was brought home from Mexico thanks to a disappointing 10th place finish for the holding World Champion, Stoffel Vandoorne. His teammate fared no better, ending the race outside of the points in 12th.

The race was no better for Jaguar TCS Racing either who could only retrieve four points from the weekend, after Mitch Evans’ eighth place finish. It was no better for his teammate, Sam Bird who failed to cross the finish line, pitting early in the race.

It was a weekend to forget for both teams, who will undoubtedly be looking to improve things for the next races at the end of January.

Mexico City has been one of the most eagerly anticipated races on the Formula E calendar. It not disappoint either as it debuted the Gen3 cars. Over 40,000 fans were out in full force cheering on the drivers and teams who treated them to an incredible racing spectacle.

The introduction of the Gen3 cars brought a feast of action and wheel to wheel racing which did not go unnoticed by the spectators at the track. The world’s most sustainable racing car made a solid name for itself. It was a timely reminder of Formula E’s role in challenging convention and leading the world into a more sustainable future.

Feature Image was provided to us by Formula E