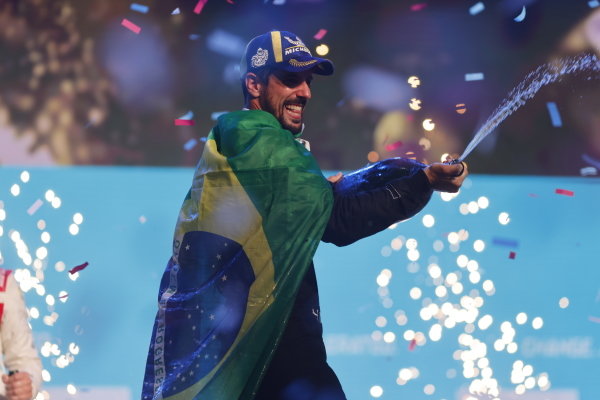 After competing in every race since its inception, Lucas Di Grassi celebrates his 100th race in Formula E.

Round 16 sees Formula E hit the 100-race mark. Two drivers so far have competed in every race since the series inception; Sam Bird and Lucas Di Grassi.

Unfortunately due to injury Bird is unable to celebrate this milestone as Jaguar TCS reserve driver Norman Nato takes his place for the final two rounds.

This leaves Lucas Di Grassi as the only driver to reach 100 races. We explore his career so far and see just how much the sport has changed.

Di Grassi entered Formula E from its inception in 2014. In his very first season with Audi Sport ABT, Di Grassi finished 3rd in the championship. As well as this, the Brazilian also won the first ever Formula E race at the Bejing E-Prix.

Moving into the 2015/16 season Di Grassi stayed with Audi Sport ABT Schaeffler. Here he had another successful season taking home three race wins and seven podiums. This put him in strong contention for the championship title, where he narrowly missed out to Nelson Piquet Jr.

The 2016/17 season proved to be the Brazilian’s most successful. He went into the final round ten points behind Sebastien Buemi. He, however, was able to overcome this gap after Buemi was unable to score. This saw Di Grassi crowned season three champion, taking his first Formula E championship.

Despite putting up a strong battle during the 2017/18 season, he was unable to keep his championship title. He finished 3rd in the championship as Jean-Eric Vergne took the crown with Sebastien Buemi taking second place. The third-place streak continued into the 2019/20 season.

In their final seasons, Audi Sport ABT Schaeffler had become less dominant. Di Grassi placed 6th in the 2020 following in 7th during the 2021 season.

Audi however, withdrew from the sport at the end of season seven. This saw Di Grassi make the move over to Monaco-based team RoKiT Venturi Racing. Di Grassi currently sits P6 in the driver’s championship after taking his first win of the season during round 14 of the London E-Prix. As well as this he has picked up three podiums.

Di Grassi is widely classed as the most successful Formula E driver and he is set to become the first driver to surpass 1000 points during the penultimate rounds in Seoul. The final round also sees him reach 100 races. Speaking to Formula E on his achievements Di Grassi commented;

“It’s a privilege for me. My career would have not been anything close to what it was without this.”

As well as commenting on his own experience, Di Grassi also took the time to explain the progression of the sport. He commented “I think the championship has evolved, everybody can see that’s the case. Since Season 1, there have been massive changes”

“It has matured and it has moved from being something new and full of doubts to something which has been able to deliver on its promises.”

He went on to say “Formula E has established itself firmly as one of the most important racing series in the world and it’s constantly growing organically – we know now the doubts were wrong and we know it works.”

Di Grassi also explored the future of the series, saying “The next big thing is Gen3 which has huge potential.” Going on to add “We’ll drive much faster, smaller and lighter cars which will be even more impressive to see on-track. The events are going in the right direction, providing a better and better product for fans to come and involve themselves with. The evolution will continue in this way – on the technical side and in the spectacle.”

Summing up the past 100 races and looking to the future, Di Grassi concluded;

“Formula E, over the last eight seasons, has served its duty of making electric cars sexy and making sure they’re in people’s consciousness. Now, we’re entering the second stage of things. The championship and technology is established and encouraging evolution is the next step.”

Despite Di Grassi being out of championship contention, ROKiT is still able to take home the team’s championship sitting 36 points behind leaders Mercedes-EQ.

He spoke to Formula E about the intentions for Seoul saying, “Our main target in Seoul is to win the Teams’ World Championship. We want ROKiT Venturi Racing to be number one and the task is hard, but it’s mathematically feasible. While it’s feasible, we’re going to work very hard to achieve it.”

He went on to add;

“We know how things are in Formula E – anything can happen. So, we’re going to be on top of it and try and bring the title home for the team.”