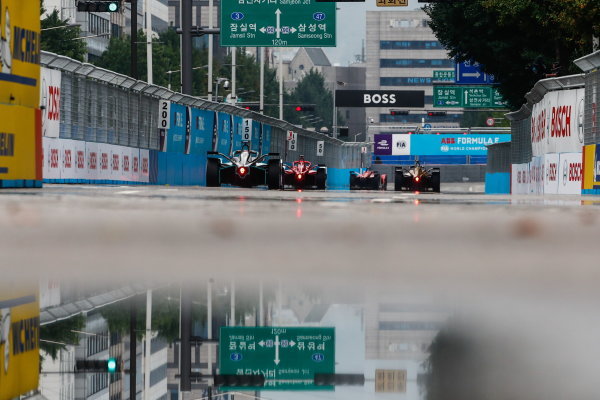 Has the Championship been decided?

Antonio Felix Da Costa claimed pole position for the season finale in Seoul as both championships heats up.

Jake Dennis topped the times of Group B with a 1:21.673 while Antonio Felix Da Costa claimed P2 with a 1:21.718. Jean-Eric Vergne claimed P3 with a 1:21.767 while Dan Ticktum claimed P4 with a 1:21.801 progressing through to his first duel of the season. After tapping the wall in the stadium section championship contender Mitch Evans failed to progress through to the duels.

THIS could be a deciding moment in the championship!@mitchevans_ misses out on the Duels as @JaguarRacing switches focus to the race, our season finale where the World Champion will be decided!

Ticktum and Mortara were the first pairing to go head to head in the duels. Ticktum took to the track first, however, after a lock-up he set a 1:21.611. This, however, was not enough to see him through to the semi-finals as Mortara set a 1:21.229

Vandoorne and Vergne were next to go head to head. Vergne took to the track first, and after a mistake, at the beginning of the lap, Vergne set a 1:22.642, seeing him eliminated. Vandoorne saw himself progress to the semi-finals with a 1:21.260.

Frijns and Da Costa were the next pairing to face off. Frijns took to the track first setting a 1:21.194. Da Costa progressed through to the semi-finals after setting an astonishing 1:20.920, the fastest time of the session so far.

Di Grassi and Dennis were the last pair to face off in the quarter-finals. Di Grassi took to the track first, setting a 1:21.209. This, however, was not enough to see him through to the semi-finals as Dennis set a strong 1:21.035.

Vandoorne and Mortara were the first to go head-to-head in the semi-finals. Vandoorne took to the track first, setting a 1:21.069. This, however, wasn’t enough to see him through to the final as Mortara set an astonishing 1:20.913.

Dennis and Da Costa were the final pairing to face off in the semi-finals. Dennis took to the track first, setting a 1:21.050, however this saw him eliminated as he was marginally beaten by Da Costa. Da Costa set an incredible 1:20.925 seeing himself through to the final.

Da Costa and Mortara were the final pairing to take to the track and face off. Da Costa was unable to be beaten by Mortara as he saw himself take pole position for Formula E’s 100th race.

The starting grid for the season finale is set. Here's how our grid lines up for Round 16!