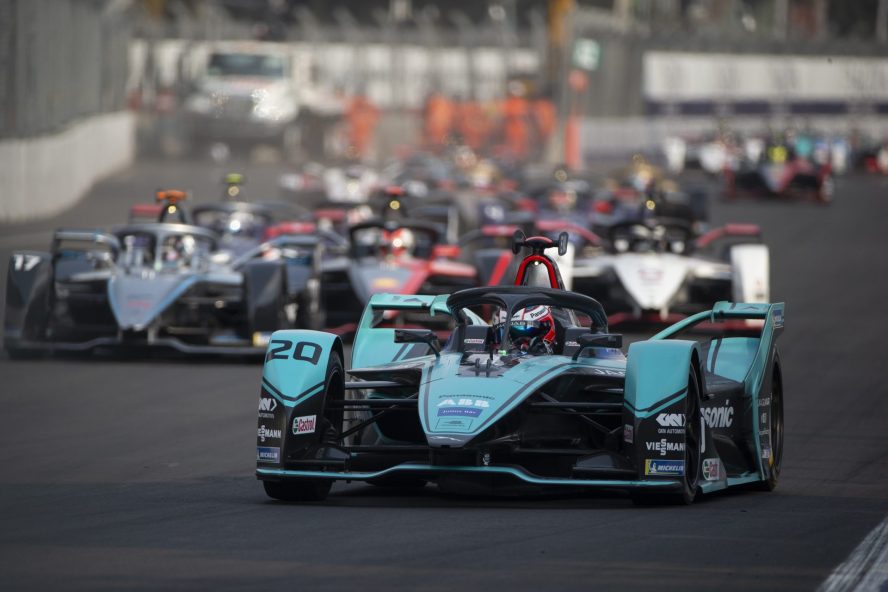 Stoffel Vandoorne has clinched the 2022 Formula E World Championship after finishing third in the second Seoul E-Prix of the weekend.

Despite facing early pressure from Robin Frijns and having his lead over title rival Mitch Evans slashed by a fifteenth lap safety car, Vandoorne was able to hold on to win his first Formula E crown.

Evans won the Seoul E-Prix yesterday, but he was ultimately unable to make up enough ground to compete for the title, finishing seventh, having qualified 13th for the final race of the season.

Speaking ahead of the podium ceremony, Vandoorne praised the efforts of his team, which is set to be replaced by McLaren on the Formula E grid next season.

“It’s just the best feeling ever,” said the 2022 Formula E world champion. “You know, just look at the season we’ve had, the consistency of the car has been amazing. The team has done an amazing job and I think every single one of us deserves this.”

“What we’ve accomplished is something special,” he added. “It hasn’t been easy. There have been some really strong competitors. Mitch Evans was right on our tail up until today’s race, he’s pushed me all the way. It was really about the consistency in the end. You know, they all have more wins than me. But I’ve got the most podiums.”

Vandoorne may have started the 2022 Seoul E-Prix with a 21-point advantage, but he had to navigate a tricky race packed with flashpoints to take home the Formula E championship trophy.

Up until lap five, Envision’s Robin Frijns had looked like he might get past Vandoorne, and he was all over the back of the Mercedes man as the drivers used attack mode for the first time.

Following the yellow flags brought out by contact between Wehrlein and De Vries, however, Vandoorne was able to leave Frijns well behind him and concentrate on matters in front.

Then, on lap fifteen, Vandoorne’s gap over his championship rival appeared to have been slashed by a safety car caused by Max Günther, but Evans couldn’t make up any further ground, and the Belgian closed out the race to take the title.

While not the star of the show on this occasion, Edoardo Mortara did go on to win the race, doing so largely unchallenged. Yet, after the chequered flag, the Venturi driver was regretful about what could’ve been this season.

“I knew that if I could manage to take the lead, we’re normally pretty good at managing race from the front,” said Mortara.

“I mean, I still feel extremely frustrated because we didn’t manage to score any points in the last few race weekends,” he added. “[But] I’m so thankful, you know, for the team for giving me such a strong car with a fantastic season and to finish like this.”

Round 16 not only marked Formula E’s 100th race, but Mercedes’ final E-Prix in the sport and the last event to be run with its ‘Gen 2’ cars.

Bringing an apt end to this generation of vehicles, the action-packed race saw scraps between drivers right through the field. 2019-20 champion António Félix da Costa sent one up the inside of Jake Dennis on lap 18, causing contact that saw him drop back to tenth, and the Brit being hit with a five-second penalty.

Further down the field, Alex Sims, who started at the back due to multiple penalties, fought his way up to an impressive 12th having saved his attack mode while the rest of the pack used theirs early-on.

Even before triggering the race’s safety car, Günther had also been in the thick of the action, causing contact by going three-wide into the first corner while seeking to make ground in the early stages, only to end his race early after touching the barriers.

2016-17 champion Lucas di Grassi, meanwhile, looked ready to help Venturi take the fight to Mercedes in the teams’ championship for much of the day, but he suffered a puncture on lap thirteen that took him out of contention.

As Formula E moves into its ninth season, there’s a lot of optimism about the Gen 3 cars set to be deployed, which feature a top speed of up to 200mph, 16mph more than the current cars, and a front-mounted motor used only for energy regeneration.

That said, there’s also a lot of uncertainty around the sport, with this season’s newly-crowned Mercedes team leaving, Maserati set to takeover the Venturi outfit and Dragon Penske planning to inherit Techeetah’s DS partnership.

Likewise, Vandoorne is reportedly set to join this new-look DS Penske team, but at time of writing, the sport’s latest champion doesn’t officially have a drive for next year.