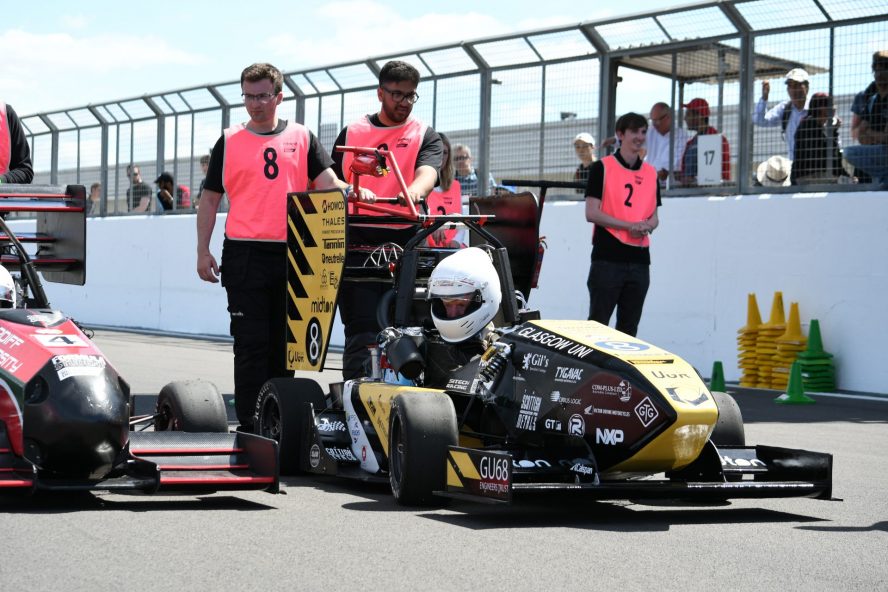 UGRacing, the current champions, have gone all electric...

University of Glasgow Racing, the reigning champions of Formula Student UK, has scrapped its first-place formula and to go fully electric.

Red Bull Racing has just won the constructors championship. Now, imagine if they decided to scrap all of their Formula 1 endeavors and go fully electric and move over to Formula E. This is what one Formula Student team has done.

Formula Student is the pinnacle competition for motorsport engineering. Universities from all around the world participate in this competition. Winning the main event with a car featuring an internal combustion engine is a massive achievement and one that not many teams have reached. The reigning champions moving fully electric is a huge deal.

Having spoken to the (now) Formula Student champions before their victorious competition weekend, we now catch up six months later.

After finishing first at the competition, the team held a “Victory Ball”, just as any good champions would do. Despite this, our discussion mainly centered on the car. Not ones to dwell on the past, however successful it might have been, the team got straight into their plans for the future.

The Plan to go Electric

Firstly, you may be asking, why would a championship-winning team go fully electric? Well, it was always intended to be this way! The team, after years of hard work on the combustion car, had their sights set on entering an electric vehicle.

The team already reached a momentous achievement in being the best team in Scotland and was ready for new goals and challenges. Last year the team intended to enter three cars into all three classes: Internal Combustion, Electric, and Driverless.

However, the electric plans didn’t make it out of the garage and the team only took two cars to competition. Despite the initial disappointment in the electric car remaining a concept for 2022, the team knew they would be going all-electric for the year following so didn’t mind too much.

They certainly didn’t mind when their final combustion car won! That really was the cherry on the cake.

Electric motorsport is growing and it is clear that electric vehicles will be the way forward. The team has quoted that they wanted to go electric because the “future of transport is electric” and that electric vehicles are the most environmentally friendly as “EV vehicles have 3x less emissions than a vehicle with a new combustion engine”.

How is UGR Going Electric

As Formula Student Champions the team had tons of interest at the University of Glasgow freshers fair. The team has taken on plenty of new recruits in their transformation to electric racing. UGRacing has taken on 42 more students to work on their electric vehicle and a further 29 to work on the previously mentioned driverless car.

The team will have to develop a high-voltage powertrain and manufacture it themselves. This is something that Head Engineer Jackson Rennie has stated will be one of the challenges of going electric. However, he did point out that many of the team members have been “high voltage safety trained”.

Rennie also brought to light that to even get into the competition with their electirc car, they will have to pass new “scrutineering” tests which deem the car fit for competition. These tests are a challenge in themselves as the car has to fit into the precise guidelines and rules.

To announce this radical change, the UGR team first teased on their social media that “something” was coming. They then posted their first Instagram stating that they will be going fully electric.

Throughout the week, the team will reveal more and more about their change to electric. If you want to keep up to date with Formula Student or the UGRacing team’s change to go electric follow them on Instagram @UGRacing, Twitter @UGRacing_fsae, or on Facebook.