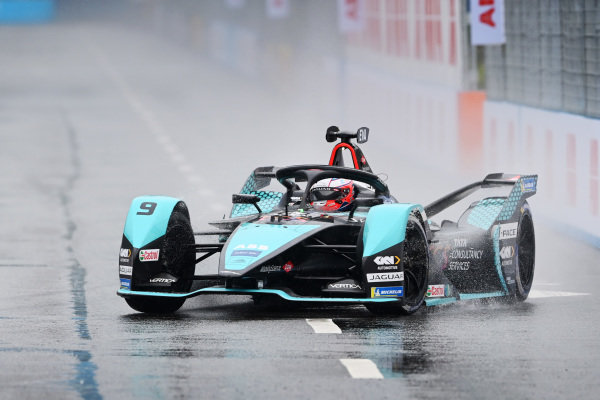 Who will take the championship?

Mitch Evans claims a dominant win in Seoul after a dramatic E-Prix.

With the championship heating up at the front of the field, a very damp Seoul Olympic Park holds host to Round 15.

Vandoorne enters the round 36 points in front of championship contender Mitch Evans. However, after an action-packed qualifying session, Evans has the better hand sitting in P3 compared to Vandoorne’s P7. For Evans to still have a chance of the title, he must outscore Vandoorne by seven points. Mortara remains in contention as he sits only five points behind Evans.

As the lights go out, we start with a wet standing start. Evans had a strong start taking the lead off both Rowland and Di Grassi by turn two. Slightly behind Rowland passes Di Grassi to take P2. Jake Dennis was also on his tail passing Di Grassi to take P3.

Further behind on the track the red flag is brought out due to an eight-car crash at turn 21.

Great to see all seven drivers walk away unscathed from this incident at the start of the race.

Round 15 is currently under red flag conditions as the cars are recovered from the track.

As racing resumes the order remains as it was when the red flag was brought out. Nick Cassidy and Norman Nato were allowed to restart the race as they didn’t leave their cars. Evans controlled the restart after the safety car had led the pack out.

Slightly further back in the pack, Vergne made contact with Mortara from behind. As a result, Mortara went out wide, allowing Vandoorne to make up a position to P6.

Jake Dennis was the first of the front runners to take attack mode.

Despite Mortara being hit, he receives a five-second time penalty for multiple changes of direction on the track.

Di Grassi also takes attack mode and manages to keep himself ahead of Jake Dennis in P4.

Evans followed, taking attack mode; however, he kept hold of his lead as Rowland sits over a second behind in P2.

With just over 26 minutes remaining, Vergne also activates his attack mode as Vandoorne is on his tail.

In the midfield, Mortara continued to battle with championship rival Vandoorne for P6. At the front of the field, Evans takes his second and final attack mode of the E-Prix.

Alexander Sims also received a five-second penalty for causing a collision with Antonio Giovinazzi that left him spun out on track.

The battle between Vandoorne and Mortara turned into a three-car battle as Vandoorne passes Vergne for P5.

Back at the front of the field, Evans continued to extend his lead up to 2.3 seconds, while behind both Rowland and Di Grassi activated their second attack mode of the session.

With just over 15 minutes remaining, Mortara was passed by Pascal Wehrlein who had activated his second attack mode. In the same battle, both Vandoorne and Vergne activated their final attack mode of the session, leaving Wehrlein unable to pass.

Vergne was not giving up, however, despite being out of championship contention as he continued to put pressure on Vandoorne for P5.

With six minutes on the clock, Evans continued to extend his lead at the front of the field.

The full course yellows are brought out with just over a minute to go after Sims hit the wall, putting him out of the race. In the added time a full safety car was brought out.

With the race finishing under safety car Mitch Evans takes the race win home, closing the gap in the championship battle.

.@mitchevans_ brings home the win on the streets of Seoul 👏

The championship battle goes down to the final race of the season – you won't want to miss it!