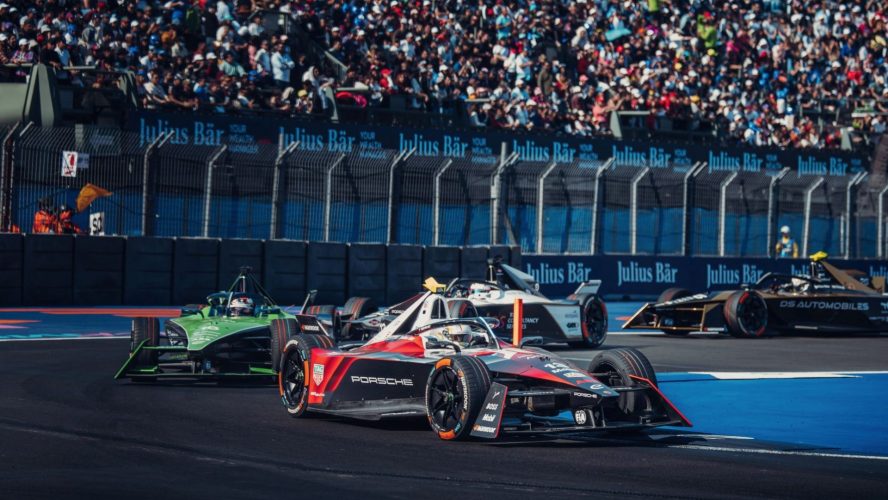 Formula E: Porsche hope to keep momentum going with a win in Diriyah

After a great race in Mexico City, Porsche are wanting to build on this and bring home more points in Diriyah.

After their result, the team are looking to build on the success heading into Round 2 and Round 3 of the Formula E World Championship. The next race is in Saudi Arabia in Diriyah this weekend.

The track for our 2023 CORE #DiriyahEPrix double-header under the lights 🇸🇦🤩 pic.twitter.com/vG3TMRj246

After Porsche’s success in Mexico City, Wehrlein spoke to Formula E about the team’s results. The 28-year-old said:

“Qualifying with P6 was the worst session for us. To come back to P2 from P6 during the race was amazing and I think everybody in the team can be proud of their hard work.”

On the other side of the garage, Wehrlein’s teammate, Antonio Felix Da Costa finished seventh in Mexico City. This still brought home a handful of points.

The Portuguese said that he was happy with the car but wants to work on his personal performance for the rest of the season. Da Costa commented on this saying:

“I’m pleased with how the season kicked off but, obviously, I want to do better at the next races.”

After the Mexico City E-Prix, Porsche currently sits second in the team championship. This puts them behind the customer team Avalanche Andretti.

Looking Ahead to Diriyah

Despite wanting to succeed in the races ahead, Porsche realises that night races in Diriyah could very well be challenging for them.

Florian Modlinger, the Director of Formula E Factory Motorsport, has stated that Diriyah will be crucial in their Season 9 campaign. Modlinger explained this saying: “The night races in Diriyah with completely different track characteristics pose a new challenge. The performance of individual teams might look very different there.”

This coming weekend will be incredibly important and Porsche know that they need to have a flawless weekend. They need to be perfect to challenge their customer team, Avalanche Andretti.

Although Wehrlein was happy with his performance in Mexico City, he shares Modlinger’s views and knows that the team need to keep up the momentum. He said:

“There’s definitely still a lot more potential to find in the cars as the season progresses and, during this very normal process, we need to make sure that we maintain our top ranking.”

Porsche will race this weekend on the 27th and 28th of January in Diriyah. Will Porsche come out on top?