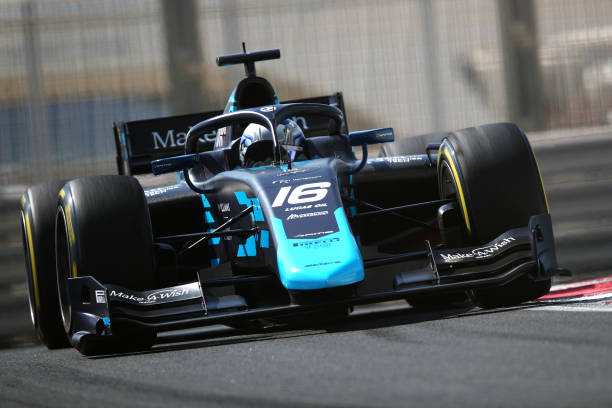 Ayumu Iwasa took pole position in the final round of Formula 2 qualifying in Abu Dhabi.

He was followed by his teammate Roy Nissany, who took a shocking second place, and Theo Pourchaire came in third.

All 22 drivers (including some new faces in Zane Maloney and Juan Manuel Correa) were out on the track as soon as the session started.

But he was quickly overtaken by UNI Virtuosi’s Jack Doohan, who was the first driver to set a lap time within the 1:36s range. Not long after, his teammate Marino Sato spun into the wall, causing the first red flag of the session with less than ten minutes gone.

But it didn’t take too long for the marshals to clear his car away, and the session restarted. No one improved on Doohan’s pole time right away, although Felipe Drugovich made his way to second place.

By the time the session was halfway over, Doohan was still in first, followed by Pourchaire, Jehan Daruvala, Dennis Hauger, and Iwasa. Drugovich slipped to sixth position and was unable to improve on his next flying lap.

But Drugovich wasn’t the only one, and other drivers started to have issues with the traction and lose their pace. With 12 minutes left in the session, they came back into the pits to change tyres and regroup. Notably, Carlin’s Logan Sargeant was sitting in 16th, not the result he was looking for with Super Licence points and a Formula 1 seat on the line. He needs to finish in the top six of the Formula 2 standings to ensure that this weekend.

Time was ticking, and it wasn’t long before the drivers headed back out onto the track. With less than ten minutes to go, they started their final sets of flying laps. The first driver to make major improvements was Drugovich, who took pole position from Doohan.

But again, Pourchaire quickly stole the place away from him, setting a 1:36.372. Doohan, meanwhile, had a slight brush with the wall at the exit of Turn 14 and was unable to improve.

At this point, time was almost out and drivers were setting their final laps. DAMS Racing’s Roy Nissany then set a 1:36.326 and took provisional pole by just 0.046s over Pourchaire. He was quickly overtaken by his teammate Iwasa, but stayed in second place.

Immediately after, Trident’s new driver for the weekend, Maloney, spun out of the session. It was red flagged and not resumed, giving DAMS a 1-2 finish in Formula 2 qualifying ahead of Pourchaire, Drugovich, and Doohan. Behind them Sargeant improved to sixth place, and he was followed by Hauger, Amaury Cordeel, and Liam Lawson. Trident’s Richard Verschoor took tenth place and the coveted reverse pole position for tomorrow’s Sprint Race.

With a lot at stake for many of these drivers, the final weekend of Formula 2 is looking like it’ll be one to remember.