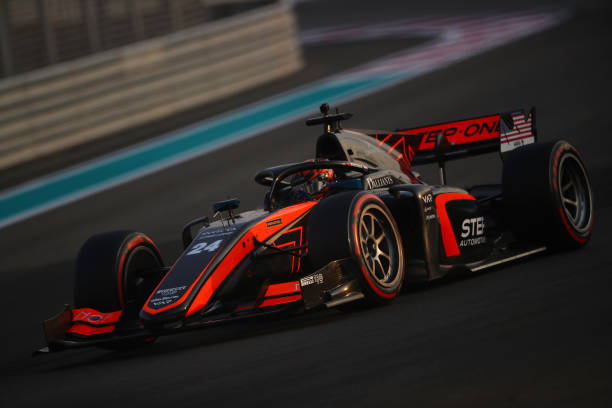 Richard Verschoor for Van Amersfoort Racing was the pacesetter for day 1 of Formula 2’s post-season test.

He was followed by the new PREMA Racing duo of Frederik Vesti and Oliver Bearman in a day full of red flags and lots of running.

It was Ralph Boschung, the driver set to return with Campos Racing for his seventh season in Formula 2 (although only his second full-time), who was the first to set a benchmark time. He put in a lap time of 1:37.820 before he was topped by Formula 2’s most recent race winner, Ayumu Iwasa.

The session stayed clean for the first part, but towards the end there were several incidents. The first driver to stop on track and bring out the red flag was Enzo Fittipaldi, driving for Carlin Racing. Then it was Kush Maini, Campos’ newest signing, but both drivers only had minor issues and were able to continue later in the session.

Brad Benavides in the Charouz car was less lucky, and spun into the barriers, ending his session early.

MP Motorsport’s Dennis Hauger set the pace for the morning, with a fastest lap of 1:36.821. Less than a tenth behind him was Jack Doohan, and then Verschoor followed in third. Amaury Cordeel and Formula 3 champion Victor Martins were fourth and fifth.

The driver to complete the most laps in the morning session was Doohan, who completed 41 laps of running. On the other side of things, Hitech’s Isack Hadjar only managed 8 laps, the only driver in the single digits that morning.

Despite having an issue in the morning session, Maini was the first to take the P1 slot, setting a 1:38.567.

He improved on his own time but was overtaken by Hauger, who set a 1:37.309. Not long after, Roman Stanek, filling a seat at Trident, was the first to bring out the red flag in the afternoon. The Formula 3 driver stopped on the track and had to be recovered.

When the running resumed, Daruvala joined his former PREMA teammate and now MP Motorsport teammate in the top two.

As the temperatures at the track cooled down later in the day, drivers were able to improve significantly on their lap times. The MP Motorsport drivers and the PREMA drivers continued to fight for the top times.

The final red flag of the day was brought out by Jak Crawford, driving for Hitech. He spun and hit the barriers, resulting in the end of his session. The only driver to complete fewer laps than him in the afternoon was Theo Pourchaire, who had 14 laps of running to Crawford’s 18.

Verschoor set the top time of the session, and the day, in the final minutes. A 1:36.395 was enough to put him ahead of the PREMA drivers, although not by much. The top five of the afternoon session, which included Hauger and Iwasa, were all faster than Hauger’s fastest time in the morning session.

There are two more days of Formula 2 testing in Abu Dhabi. For tomorrow, the only driver change is that Juan Manuel Correa will replace Rafael Villagomez at VAR.