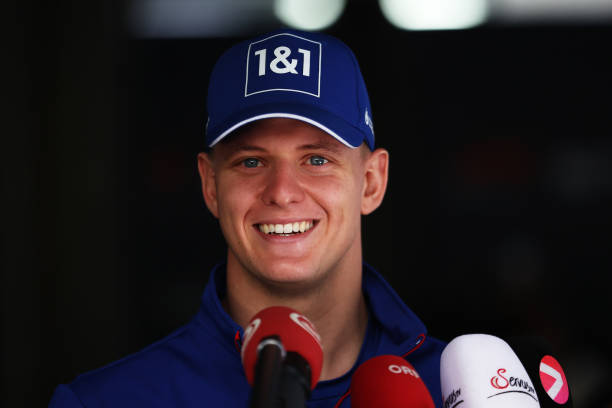 SPIELBERG, AUSTRIA - JULY 07: Mick Schumacher of Germany and Haas F1 talks to the media in the Paddock during previews ahead of the F1 Grand Prix of Austria at Red Bull Ring on July 07, 2022 in Spielberg, Austria. (Photo by Bryn Lennon/Getty Images)

Nico Rosberg has given his views on Haas' Mick Schumacher

Mick Schumacher has recently found his form but Nico Rosberg believes he isn’t ready for a move to a top team.

With a surname like Schumacher, Mick Schumacher is instantly recognisable within the world of Formula 1 because of the legacy the name holds. Having a seven-time world champion as his father also means that there are a lot of eyes on the Haas driver.

2022 is Schumacher’s second season in Formula 1. He joined the championship after winning the Formula 2 2020 season, following on from his Formula 3 win back in 2018.

Entering Formula 1, Schumacher was partnered with Nikita Mazepin as teammates for Haas F1. Last season, however, was not the debut year Schumacher would have liked in terms of results.

In the Drivers’ Championship, Schumacher finished 19th on zero points, equal with Mazepin. The lack of points for both drivers meant that Haas placed last in the Constructors’ Championship.

Coming into his second season with the team and the introduction of the new regulations and a new teammate, things are looking good for the young German. Admittedly, at the beginning of the year Schumacher wasn’t performing as well as his teammate, Kevin Magnussen.

But in the past two races, he has definitely found his form and unlocked the potential of the Haas. At Silverstone, Schumacher scored his maiden Formula 1 points as he finished eighth.

Last weekend in Austria, he improved on his results. In the Sprint Race, he finished ninth resulting in no points, but on the Sunday, Schumacher finished sixth. This added eight more points to his total, bringing him to 15th in the standings on 12 points.

Being part of the Ferrari Driver Academy and currently racing for a team that uses Ferrari engines, it’s only natural for him to progress to Scuderia Ferrari. However, Nico Rosberg has said that Schumacher isn’t ready.

Rosberg, who was former teammates with Michael Schumacher, has shared his views on the young Schumacher’s Formula 1. He said to Eurosport that “Mick had a difficult few weeks”, but everyone is “happy he has now made a nice breakthrough.”

He continued to say that there is no “criticism of him at all”. This follows Schumacher being voted Driver of the Day for the Austrian Grand Prix. Rosberg noted that it seems that “everything is forgotten” because all that was needed was “a cool duel with Verstappen” and any comments are all positive.

Rosberg did note that the positivity surrounding the Haas driver could only help him. He said it’s “incredibly valuable” for Schumacher as “he’s now finding a positive mental spiral that he will carry with him to the next races.”

Despite Schumacher’s recent performances, there is no deal renewal with Haas currently in the works. Guenther Steiner has said that “performance is everything” in F1. Because of this, the team are reluctant to give Schumacher a new contract right now, just after he scored his first points. The Team Principal said that would be “too simplistic and not good for anybody.”

“He still needs time in his development. The past races have shown that. He should take his time before targeting a top team.”

The former champion added, “we saw that with George Russell, who drove for Williams for three years and was then ready to move up to Mercedes. There is no need to rush things.”

The next round of the 2022 season, sees Formula 1 head to Le Castellet for the French Grand Prix at Paul Ricard. Last year, the young German driver finished 19th scoring no points, ahead of his former teammate.

Will next weekend see him continue his run of good results and score some more points to add to his current total of 12?